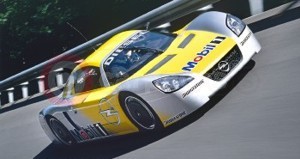 Vauxhall/Opel is celebrating 17 new world records after running the ECO-Speedster concept for 24 hours on 26 and 27 July using the brand new 1.3 CDTi diesel engine.

The exercise, carried out at the company’s Dudenhofen test centre in Germany, was to mark the beginning of a major diesel engine offensive for Vauxhall, with the introduction of four new common rail units in the coming months.

The ECO-Speedster was run at full throttle for 24 hours – interrupted only by brief routine stops to refuel and change drivers – as the records tumbled for special cars with turbocharged diesel engines in the 1100 to 1499 cc class.

The efficiency and strength of the new 1.3 CDTi engine, which makes its debut in the Vauxhall Corsa in September were amply demonstrated by the average speed of 140.7 mph over the 24 hours – breaking the previous record by 61.4 mph. A maximum speed of 160.2 mph was also achieved.

And in so doing, returned a very respectable 31.4 mpg.

In a separate exercise, an identical ECO-Speedster recorded an amazing 111.2 mpg as part of an Economy run on public roads.

Both cars had the 1.3 CDTi engine mid mounted, and used the Easytronic gearbox.

A higher performance 112 hp version of the new 1.3 litre CDTi was used for the speed runs, based on the standard four-valve engine. The production version delivers 70 hp and develops maximum torque of 170 Nm.

Kevin Wale, Vauxhall chairman and managing director commented: "The ECO-Speedster exercise exemplifies our current diesel offensive. By the end of the year we will have introduced four new common rail diesel engines to suit a wide variety of applications, from 70 to 177 hp, but all with low weight and competitive fuel economy."