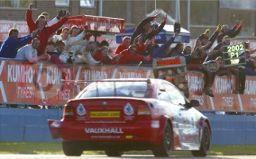 The 28-year-old’s title success also means that Vauxhall has become the first manufacturer in the history of the BTCC to secure the Manufacturers’, Teams’ and Drivers’ titles in consecutive years.

A delighted Thompson, who started his BTCC career with Vauxhall in 1995, commented: "Many thanks to Vauxhall for giving me this opportunity and to the Triple Eight team who have given me the best car out there in the Astra Coupé. After nearly 200 BTCC races, this title means so much to me."

Vauxhall’s domination of Britain’s premier motor racing series has included no less than 15 of a possible 20 Touring class race wins whilst Astra Coupé drivers have bagged 34 out of 60 available podium places. Main title rivals, Vauxhall Motorsport’s Yvan Muller and Egg Sport Astra Coupé driver, Matt Neal, who took the fight to Thompson right down to the wire, finished their season in second and third places respectively.

Vauxhall Motorsport Operations Manager, Mike Nicholson said: "Many congratulations to James who has driven with great verve and professionalism this year. He thoroughly deserves his success. Yet again the Astra Coupé has proven itself the best car out there and for that we must thank our race preparation company, Triple Eight Race Engineering. This has been very much a team effort and everyone has played their part. We now look forward to achieving the hat trick in our centenary year when Vauxhall returns to the BTCC to defend its titles in 2003."