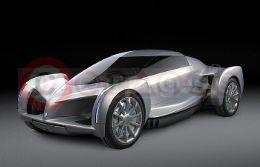 Futuristic AUTOnomy, the world's first car to be built around the fuel cell, is taking a major place on Vauxhall's stand at the British International Motor Show, in its first public showing outside the US.

AUTOnomy was born after Rick Wagoner, president and chief executive officer of Vauxhall's parent company, General Motors, asked a simple "what if?" question. The answer he got surprised even him.

"We started with the premise – what if we were inventing the automobile today rather than a century ago? What might we do differently?" Wagoner said. "AUTOnomy is more than just a new concept car; it's potentially the start of a revolution in how cars are designed, built and used."

AUTOnomy is the first vehicle designed from the ground up around a fuel cell propulsion system. It is the first to combine fuel cells with by-wire technology, allowing steering, braking and other vehicle systems to be controlled electronically rather than mechanically.

With AUTOnomy, an almost endless variety of affordable, all-wheel drive vehicles can be built from a limited number of common chassis – possibly as few as two or three – emitting only water from the exhaust and using renewable energy.

“If our vision of the future is correct – and we think it is – AUTOnomy could reinvent the automobile and our entire industry. AUTOnomy is not simply a new chapter in automotive history," says Larry Burns, GM vice president of research and development.

The AUTOnomy concept provides a vision of the potential of the coming hydrogen economy.

“With hydrogen power comes a major opportunity for sustainable economic development, which respects the environment and creates the path to non-petroleum and renewable energy sources without constraining economic growth.”

With all of its propulsion and control systems contained within a six-inch-thick skateboard-like chassis, the vehicle body is freed from traditional design requirements.

“There’s no engine to see over,” says Wayne Cherry, GM vice president of design. “People could literally sit wherever they are comfortable. Drivers wouldn’t have to sit in the traditional left or right-hand location. They could move to the centre of the vehicle or they could move much closer to the front bumper or further back.

“It will take a little getting used to, but it’s maximum freedom, maximum space for people and their stuff. There wouldn’t be foot pedals or a steering column. The body shape could be literally anything you want it to be.

“This would lead to customised bodies and more individualised expression,” Cherry said. “In fact, a customer could lease multiple bodies and swap them out throughout the week, depending on their needs.”

Cherry said that the sleek, futuristic two-seater AUTOnomy is one of an infinite number of possibilities.

“Next, we might do a mobility body that allows a wheelchair user to roll right into the driving position, or a 10-seat minibus."