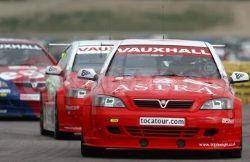 And to cap the afternoon, after the second of the day's races (Round 18), the Vauxhall Motorsport Team was officially confirmed as 2002 BTCC Teams' Champions.

After posing for photographs with the four Vauxhall Astra Coupé drivers - Vauxhall Motorsport's James Thompson and Yvan Muller and Egg Sport's Matt Neal and Paul O'Neill - Kevin Wale expressed his delight at securing the Manufacturers' title commenting: "To come back and retain our Manufacturers' title is a fantastic result for Vauxhall Motors and for everyone involved with the racing effort. And now we can look forward to the Drivers' title being fought out at the final round at Donington."

The title announcements prove once again that Vauxhall's 2.0-litre Astra Coupé BTCC race car has been the dominant force in the revamped championship.

All that remains to complete the Luton marque's hattrick of success, is for the Drivers' championship to be decided - something that will not happen until the final round at Donington Park on 22 September. Vauxhall Motorsport's James Thompson looks to be in pole position for the title but his teammate, Yvan Muller and fellow Astra Coupé driver, Matt Neal are still very much in contention having closed the gap on the Yorkshireman at Brands Hatch this weekend. Whichever driver takes the title it will certainly be an Astra Coupé driver.