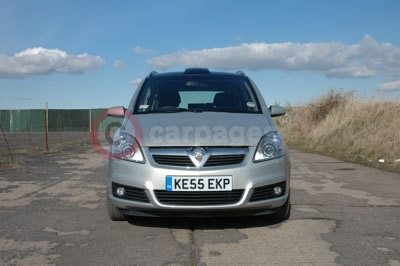 The all new Vauxhall Zafira was launched in the UK in July 2005. We first saw the Zafira in 1998 and it was quite revolutionary as it pioneered the seven seat compact MPV market and in 2004 it accounted for 40 per cent of the seven-seat MPV market.

The new Zafira keeps the flexible seating arrangement which sees it morph between a seven seat people carrier and a small domestic van.

Vauxhall are hoping to sell 50,000 in the car’s first year of production. We chose to drive the Zafira 1.8 Club to see how Vauxhall fare within the competitive world of compact MPV's.

There are a wide choice of engines and transmissions available - ranging from the 1.6 litre 16v Petrol Twinport (105ps) to the range topping Zafira VXR, powered by a 2.0 litre 16v Petrol Turbo Engine (240ps), there is also a 1.9 CTDi (120ps) diesel engine option. Transmissions are just as varied including a 5-speed manual, 6-speed manual, easytronic 5-speed, automatic 4-speed and automatic 6-speed. So there should be an engine and gearbox combination to match your requirements.

We drove the Zafira Cub fitted with the 1.8 ECOTEC engine producing 140ps through a five speed gearbox. The engine is an all-new power plant introduced in July 2005.  Vauxhall have billed the engine as flexible and refined, but we didn't like it, in fact it was our only real criticism of the Zafira, strangely for a new engine we found it unrefined and noisy. It felt as though it would not rev freely and at 4500 miles the engine was well run in.

Vauxhall quote a 0-60 mph time of 10.8 seconds with a terminal speed of 122 mph. We returned around 34 mpg which we did not consider too bad, Vauxhall quoting a combined figure of 36.2 mpg.