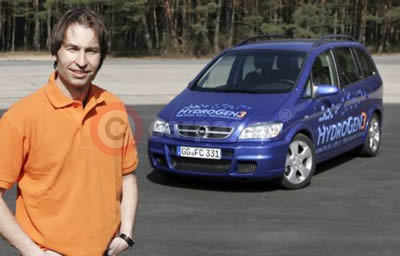 The Monte Carlo rally course is grueling enough for a conventional car, but that hasn’t stopped Vauxhall from entering its experimental HydroGen3, a fuel cell prototype based on the Zafira MPV, in a very special event to prove its reliability. The car will be on the grid for the first weekend of April at the Monte Carlo Fuel Cell and Hybrid Rally, with star driver Heinz-Harald Frentzen behind the wheel. Frentzen was Formula One World Championship runner-up in 1997, is a three-time Formula One Grand Prix winner and current driver in the German Touring Car Championship.

The Monte Carlo event involves driving to target times and is organised by the International Automobile Federation (FIA) (Fédération Internationale de l’Automobil) and the Automobile Club de Monaco (A. C. M.). It begins with vehicle scrutineering on 1st April in Lugano, Switzerland, and the rally itself kicks off on April 2 at 9.00 a.m.

The 255 mile long route passes through Switzerland, Italy and France to Monaco, and according to the rules the fuel cell vehicles are allowed one stop for refueling. "Because it passes through the Maritime Alps, the Rally Monte Carlo is considered one of the most difficult in the world", says Dr. Udo Winter, Chief Engineer at GM Fuel Cell Activities centre in Germany. "We want to expose the HydroGen3 to this particular challenge because, in terms of fuel cell technology, we are at a developmental stage in which it all comes down to testing, particularly under extreme conditions."

The five-seat HydroGen3 is powered by a 60 kW/82 PS three-phase asynchronous motor. The required electrical energy is produced by a fuel cell stack comprising a total of 200 individual cells connected in series. With its almost noiseless propulsion system, this front-wheel drive vehicle accelerates from zero to 60mph in around 16 seconds and reaches a maximum speed of 100mph, but only produces water from its exhaust pipe!

The HydroGen3 has already proven its endurance, most recently in the summer of 2004 at the Fuel Cell Marathon. In 38 days, the prototype traveled over 6,000 miles between Hammerfest, Norway and Cabo da Roca, Portugal - a new world record for a fuel cell vehicle.