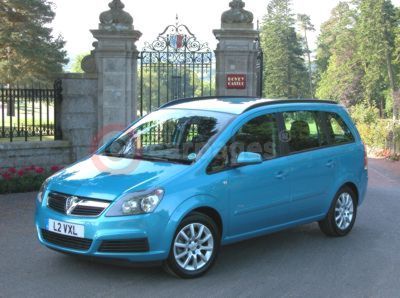 Although the all-new Vauxhall Zafira range does not go on sale in the UK until the 23 July, advance orders are already 140 per cent of the initial sales target set by the manufacturer.

The public launch of the all-new Zafira will take place on 23-24 July at a series of Open Weekend events being held at all the 450 Vauxhall dealerships nationwide.

Vauxhall this week would not put any official numbers on how many Zafira MPVs had been ordered, David Pugh, Vauxhall’s group product manager, compact cars said, "Publicity already received from the UK press about the new Zafira has created a healthy demand. Most of the initial orders have been placed by current Zafira owners and we expect to sell around 50,000 in a full year of sales".

"With so many new Zafira models going out to current owners our dealers will have a healthy supply of used models for would-be first time buyers".

Vauxhall says all new Zafira models across the range will have higher specification, better interior quality, more interior space yet they will cost less by between £350 and £850. Prices will range from £12,995 to £20,445.

This is the aggressive stance being taken by Vauxhall Motors who wish to retain the Zafira’s reputation built over the last six years. Uniquely for a volume car the Zafira has grown its market share every year since it was introduced, even at the end of its lifecycle. The Zafira accounts for 40 per cent of sales for seven seat MPVs sold in the UK and 20 per cent of all midi MPV sales. The Zafira is the market leader in most European countries with over 1.4 million sold in six years.

The new Zafira is built at Bochum in Germany where £300 million has been invested into state-of-the-art production facilities.

David Pugh said, "The Zafira started life in the UK primarily as a retail car but now 65 per cent of all sold are to the fleet, business and user-choosers sectors. The addition of an automatic transmission option for the 1.9 CDTi 120bhp model is likely to give the Zafira a big sales lift in the longer term. This is a unique combination in the sector, nobody else offers this option and we conservatively think this model will account for around 25 per cent of all diesel engine Zafira UK sales".

He added, "We decided to keep the Flex7 seating system as it has yet to be surpassed by our competitors and we couldn’t design a better system for two to seven seats and all points in between. The Zafira uses the new Astra Estate long wheelbase floorpan and it has a wider track front and rear so the interior space is larger and all three rows of seats offer more legroom and headroom than the outgoing model. By upping the quality of the interior, improving the specification but lowering the price, we have a strong product ".

Five powerplants are available for the new Zafira from launch and another two will join the line-up in Autumn 2005.

Expression, Life, Club, Design and SRi equipment and trim specifications options are available depending on the choice of engine. The innovative panoramic sunroof option with four blind covered panels and extra storage compartments adds £850 to the retail price.

The new Zafira takes its styling theme from the new Astra range with its ‘V’ face and grille. The new ‘soft’ front end for crash protection has given the front more overhang. The overall design has a strong look to it being wider from the waistline down and with a steeper A pillar for better front quarter visibility from the front seats. Vauxhall say headroom is improved throughout even through the new Zafira has a lower rear end roofline. A wide opening tailgate with low sill is adopted to make loading on to the flat load-carrying floor an easy task

David Pugh said, "Our attention to detail has been key for this car and we have made small but significant changes to achieve this. Things like the open and start keyless system just makes life with a new Zafira easier".

Pugh added, "With regard to residual values we expect the new Zafira to improve on the current ratings. Currently the lowest rating is for the 1.6-litre Life model, which retains 29 per cent over the industry ‘norm’ of three years, 60,000 miles. We anticipate this will climb to 35 per cent and the six-point increase will be represented right across the range".