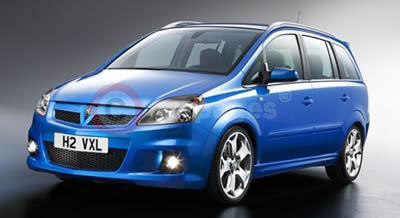 Family life doesn’t have to mean kids get all the toys! Vauxhall has just revealed its hot version of the new Zafira, and it promises to offer hot-hatch looks, performance and driving dynamics combined with the family-friendly flexibility of a seven-seat MPV. Making its debut at the Geneva Motor Show, the new model will replace the highly-successful GSi version of the outgoing Zafira which was the first MPV to make the school run fun.

The new car promises to be even more thrilling, thanks to the 240PS, 320Nm 2.0-litre turbo engine which it shares with the Astra VXR. Coupled with a six-speed manual gearbox, it’s estimated that the Zafira VXR will hit 60mph from a standstill in 7.2 seconds, and go on to reach a top speed of 144mph, making it the fastest production MPV in Britain.

To ensure that the car can be agile and responsive through the bends - even with the vastly differing load weights of between one and seven passengers - Vauxhall’s innovative IDSPlus electronic chassis control is fitted as standard. Huge brakes (321mm discs at the front) with distinctive blue brake callipers ensure the VXR can stop safely and effectively, even when fully laden.

The hottest Zafira’s dramatic look is underlined by the exterior styling, with the VXR trademark honeycomb grille, a larger front bumper with a central air intake and integrated fog lights. Deep side sill extensions lead to a new rear bumper incorporating twin trapezoidal exhaust tailpipes. A tailgate-topping spoiler and massive18-inch alloy wheels with 225/40 ZR 18 tyres complete the look. If you still don’t think the Zafira looks like the daddy, then supercar-sized 19-inch alloys are an option.

The interior is equally dramatic to look at, although it still maintains the practicality Zafira drivers expect. Front seat occupants enjoy the comfort and support of Recaro sport seats in two-tone leather/fabric. Trim strips on the instrument and door panels are colour-coordinated to the seats, and the sports steering wheel and gearshift lever incorporate the VXR logo. Like its predecessor, the VXR uses the ingenious and easy-to-use Flex7 seating system which allows the Zafira to be turned from a seven to a six, five, four, three or two-seater in a matter of seconds without having to remove or stow away the seats.

The new Zafira range goes on sale in July, with the VXR model following three months later in October. Prices will be announced nearer to launch.