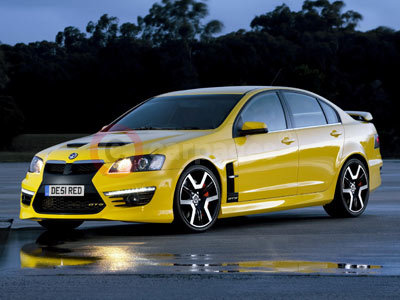 The Vauxhall VXR8 model is back with a vengeance, packing heavily revised front- and rear-end styling, a new cabin and a raft of new technology to enhance its appeal to drivers in search of one of the last, great rear-drive V8 super-saloons.

Priced at £49,500 (inc. 20 per cent VAT) and available to order later this month, the new Vauxhall VXR8 is now based on HSV's E3 GTS model, just launched in Australia, the previous Vauxhall VXR8 representing the old version of the lower-spec ClubSport R8. That means it still undercuts full-size super saloons like the Audi RS6, Jaguar XFR and Mercedes E63 AMG by between £13k and £29k, and even performance saloons from the class below, such as the BMW M3 and Mercedes C63 AMG.

A new, 'Shockwave' grille, LED daytime running lights and sleek new wing-vents mark the new car out from the front, while the rear features a new 'Superflow' rear spoiler, LED tail lamps and twin exhaust tips that mimic the shape of the front grille. As you can see from these first official press shots of our Hazard Yellow car, the new Vauxhall VXR8 will never blend into the scenery!

As before, the new Vauxhall VXR8's race-bred chassis uses MacPherson struts/progressive rate coil springs at the front and a multi-link independent set-up at the rear. But for the first time on a Vauxhall VXR8, Vauxhall has employed Magnetic Ride Control (MRC), a suspension system which adapts up to 1000 times a seconds to road conditions and driver inputs. Based on technology used in GM's current Corvette ZR1 supercar, MRC works by sending an electric current through damper units filled with 'soft' magnetic particles. These particles harden as the input reaches its maximum value, providing drivers with exceptional levels of ride, handling and stopping power.

Complementing the new Vauxhall VXR8's MRC is Launch Control, which is engaged when drivers select the ESC's (Electronic Stability Control) Competition Mode. The system dictates the level of torque delivered to the rear wheels for maximum acceleration, according to surface conditions. All the driver has to do is floor the throttle and let the car do the rest. Extensive testing has proved that LC results in acceleration runs no more than 0.1 second apart.

Of course, no Vauxhall VXR8 would be complete without a large-capacity V8, and this latest version doesn't disappoint. The fourth generation 6.2-litre LS3 unit produces 431PS and a massive 550Nm of torque, enough to propel the Vauxhall VXR8 from 0-60mph in 4.9 seconds and on to a governed top speed of 155mph. As before, drive is delivered to the rear axle via either a six-speed manual or auto transmission, working through a mechanical limited slip differential.

But for drivers who want to engage with their Vauxhall VXR8 like never before, Vauxhall has introduced EDI, or Enhanced Driver Interface. EDI connects with the on-board computer to constantly stream real-time vehicle dynamics and performance to the car's main 5-inch monitor. At the touch of the screen, drivers can access a variety of data such as vehicle G-forces, power and torque and lap times - even the degree to which their Vauxhall VXR8 is drifting. Completing the clever package is the ability for drivers to download data, such as track day performance, and analyse it using the MOTEC i2 software provided.

Befitting its exclusivity, the Vauxhall VXR8 is now available through just six highly specialist VXR dealers in the UK, though a total of 34 VXR outlets will be authorised to maintain the model.

Vauxhall VXR8 Images may not be UK specification cars. Colours and exterior and/or interior elements may differ from actual models.