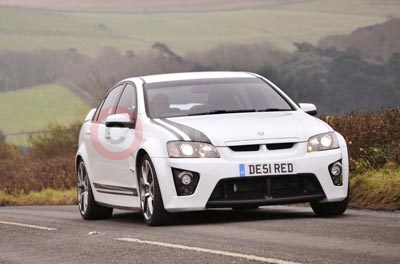 Few will claim that Vauxhall's storming VXR8 super-saloon is lacking in the power stakes, but just in case there were any doubters, the Bathurst S Edition will put them straight.

Thanks to the addition of a Walkinshaw Performance 122 Supercharger, the Vauxhall VXR8 Bathurst S dispenses 560 V8 horsepower, compared with the standard car's 431 horsepower, and produces searing acceleration throughout the rev-range and a spine-tingling, banshee wail when you hit the loud pedal.

The Vauxhall VXR8 Bathurst S Edition joins the normally aspirated Bathurst Edition at the top of the Vauxhall family tree, with both cars receiving a raft of technical and cosmetic upgrades over the standard VXR8. Only a limited number of Bathurst Editions will be sold through selected Vauxhall retailers.

To exploit the Bathurst's greater power potential, six-pot front and four-pot rear callipers are now standard on both models, along with stiffer, height-adjustable springs and Walkinshaw-developed coil-over dampers. The bespoke damper units have 15 separate valve settings with independent corner adjustment for the owner's preferred setup.

Dynamically, both Bathursts retain the Vauxhall VXR8's much praised ride quality, but body control is enhanced and the handling made more exploitable for the enthusiastic driver.

At the heart of the Vauxhall VXR8 Bathurst S is Walkinshaw's 122 Supercharger, which not only boosts power by 30 per cent, but escalates torque from an eye-catching 550Nm to an eye-watering 715Nm. Such is the strength of the LS3 V8 engine that extracting bigger figures would have been possible, but retaining the Vauxhall VXR8's driveability and durability was Walkinshaw's priority.

In fact, the 122 Supercharger is so much more than just a bolt-on blower. The comprehensively engineered package also includes a large capacity intercooler, high-flow fuel injectors, a separate cold air intake and Walkinshaw-developed ECU map, while the standard manual gearbox is upgraded with a high-torque capacity clutch.

As with most supercharged cars, the S's power delivery is exceptionally linear, with a huge slug of torque available from very low down in the rev range; but push the engine towards its redline and there's no let up in the car's performance, just a seamless stream of power.

Outside, both Bathursts are instantly recognisable by their distinctive graphic packs, front fog light covers and 'Bathurst' badges (only the addition of a discreet 'S' badge reveals the supercharged model's extra 129PS), while inside a console-mounted badge showing the car's build number complements the 'Walkinshaw Performance' tread plates found inside each door opening.

Putting icing on the cake for serious drivers is the option of the new Bi-Modal Exhaust, which is available on both Vauxhall VXR8 Bathurst models. Raising power by up to 10PS, the ingenious system allows drivers to select one of two noise settings: 'Street', with an upper limit of 92dbA, or 'Optimum', which releases the LS3 V8's full 102dbA. The two-and-a-half inch diameter system is manufactured from stainless steel with unique chrome tail-pipe finishers and costs £1600.

Vauxhall VXR8 Images may not be UK specification cars. Colours and exterior and/or interior elements may differ from actual models.