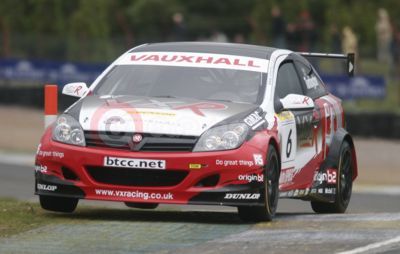 VX Racing came one race closer to the milestone of 100 race wins with Yvan Muller taking victory in the first race of the three-race Dunlop MSA British Touring Car Championship programme at Knockhill today. The win was, however, a personal milestone for Muller, as he took his first-ever win at the Scottish circuit in eight years of racing at the picturesque track. The weekend started well for the team with Colin Turkington setting the pace with the fastest qualifying lap to take pole position for the first race. Muller started third and Gavin Smith lined up in ninth place after the qualifying session yesterday.

In the first race Turkington lost ground to second place starter, Gareth Howell, at the start, while Muller retained his start position and Smith moved up a placed to eighth. Muller, not content with third place battled past Turkington, then Howell to take the lead at the end of the opening lap. Turkington attacked Howell and pushed past into second, with Howell spinning off track to let through championship contender, Matt Neal. The top three drivers retained these positions to the chequered flag, while Smith moved up from his grid position to take eighth. Muller said of his win, "It was a difficult race, in very bad race conditions, but we expect that when we come here. I don’t think I’ve been here with the sun shining! Everyone was telling me that I’ve never won here and I’ve been racing here for eight years, so it’s good to have changed that."

Grid positions for the second race of the day at Knockhill, determined by the finish results of the first race, gave Yvan Muller pole for this race, but the heavily weighted car struggled to hold off current championship leader, Matt Neal. The two battled throughout the race, but Muller had to settle for second, unable to get past the lighter Neal. Turkington dropped a place to fourth and, staving off challenges from his rivals, held his ground to finish in this slot. Smith was running well, just inside the top ten, but a mechanical problem brought an early end to his race, when he slid off the track and into the gravel. He recovered to limp into the pits and retire from the race.

For the third race, and a reverse top-ten grid under championship regulations, Turkington started as the lead VX Racing driver in seventh place, Muller was back in ninth and Smith in thirteenth. Muller demonstrated the skill and experience he has of Touring Cars moving up to sixth on the first lap and after incidents ahead, he was quickly into third, with team mate, Turkington, following in his tyre tread, in fourth. Smith, further back in the field and hampered by poor visibility was caught up with track incidents, ending up in the gravel and out of the race.

Muller, with arch-rival Jason Plato and MG racer, Rob Collard ahead of him, was pushing hard. He quickly took Plato when the SEAT driver ran wide, but Collard proved harder to pass. The Frenchman was closing fast on the MG driver when his luck ran out when he lost power. Pitting for inspection, the team put Muller back out on track, but the problem persisted and Muller was forced to retire. Turkington was the only one of the three VX Racing drivers to complete the race, running in the pack for much of the race and battling hard with his rivals and after a tough race was able to finish seventh.