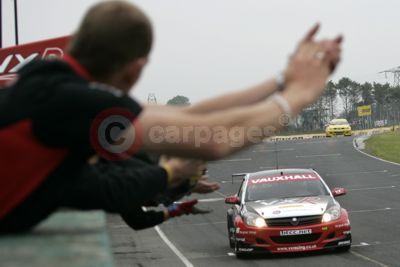 VX Racing continued its winning form this weekend at Mondello Park in Ireland, in the sixth event of the Dunlop MSA British Touring Car Championship, with two wins for Yvan Muller and one for Colin Turkington. The wins allowed Muller to close the gap to the top of the drivers’ championship and strengthen Vauxhall’s lead in the manufacturers’ championship. Turkington also claimed fourth and fifth place finishes, while Gavin Smith in the third VX Racing Astra Sport Hatch had an encouraging weekend with sixth and seventh place finishes, although a puncture prematurely ended his challenge in the second race.

Saturday's qualifying session resulted in Muller starting the first of the day’s three races from pole position, with Turkington in second place and Smith in eighth. Taking to the track for the first time in the weekend in dry conditions, Muller was quick off the line and led from lights to flag.

Muller, buoyed by the continuing development of the VX Racing Astra Sport Hatch, commented: "It was a good race. I was focussed on getting a good start and I pushed very hard for the first eight laps then backed off towards the end to keep the car in good shape. The car has improved and I am pleased with the win."

Team mate Turkington crossed the in fourth place after experiencing under-steer that hampered his speed, whilst Smith made steady progress after losing a couple of places in the early stages to bring the VX Racing Astra Sport Hatch home in seventh place.

In the second race, tyre choice was critical on a drying track and ultimately affected the finishing position of all three VX Racing drivers. Muller opted for all slicks while Turkington and Smith went for slicks on the front and wets on the rear. As the lights went out, Muller struggled to get off the line quickly from pole position and settled into second behind Tom Chilton. At the end of the first lap Muller darted into the pits to take the 30-second stop go penalty given for the team working on the car after the three-minute board, leaving him at the very back of the field.

Turkington had a good start and had claimed second place by the end of lap two and was leading from Chilton by the end of lap three. The Ulsterman held the lead until the end of the race to take his second victory for the VX Racing team. After charging up to fifth position Smith’s race ended early with just two laps to go when a puncture forced him off track and into a gravel trap.

An ecstatic Turkington commented after the race, "I’m delighted with my second win for VX Racing, especially for it to come at Mondello. It was a risk before the race to decide on which tyres to use, but we made the right choice of slicks on the front and wets on the rear. After the first win, I wanted more, and set out to win today."

The reverse grid for the final race did nothing to halt VX Racing’s domination, as Muller won for the second time today to claim his fifth win of the 2005 season. Turkington posted a fifth place finish and VX Racing team mate Smith finished just behind in sixth.

Muller started the race in fifth, with Turkington tenth and Smith fourteenth. Muller gained two places at the start and spent almost the entire first lap side-by-side with Jason Plato as the old rivals duelled for position. Muller finally managed to make the move stick, passed Plato, and immediately began to hunt down Tom Chilton and the lead. Muller finally took the lead on lap six after breaking the lap record on lap two with a time of one minute 46.510 seconds.

Smith and Turkington were in the thick of the action right from the start and traded places with many in the field. After the deployment of the safety car for debris on the track, which did nothing to stop Muller’s progress, Turkington and Smith finished fifth and sixth respectively for valuable championship points.

Smith was thrilled with the progress and development of the VX Racing Astra Sport Hatch, "The car is working very well now. We found the problem and now the car is well-balanced; credit to the team, as it was hidden pretty deep! I feel a lot more confident in the car, and can now challenge for positions rather than hold them."

VX Racing’s operations manager Mike Nicholson was pleased with the overall progress in performance this weekend, "Ireland has been very kind to us. At Croft we were competitive, but we came here not really knowing what to expect. We had a very wet qualifying and didn’t have any set-up for the dry, but we got it right and the cars have been superb. Yvan drove brilliantly and Colin has done fantastically well, while Gavin has improved tremendously. A fantastic weekend all round, and we look forward to the next round at Snetterton."