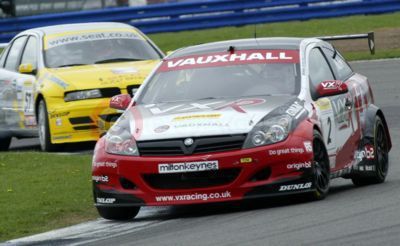 Vauxhall’s VX Racing team was today provisionally crowned as the Dunlop MSA British Touring Car Championship manufacturers’ champion for the fifth successive year. VX Racing left Silverstone circuit this evening with a 125 point lead over closest rivals Seat, with a maximum manufacturer’s score of 111 points up for grabs in the final three rounds of the 30- race series at Brands Hatch in two weeks time.

In theory, Vauxhall could still be beaten to the manufacturer’s title if at Brands Hatch it has to make a significant number of engine changes to its three cars, as each change is penalised by a deduction of 10 points; in practice, however, this is very unlikely, and the new Vauxhall Astra Sport Hatch will take the British marque to title success in its first year.

Silverstone brought a day of mixed fortunes for VX Racing: Yvan Muller was frustrated in his efforts to reduce the points lead of rival Matt Neal in the driver’s championship, the difference between the two remaining at 30 points, but Dubliner Gavin Smith achieved his best-ever BTCC result with second place in the day’s second race.

Smith, in his first full season of the BTCC, battled through an action-packed round 26 (the second of the day’s three races) from 11th place on the grid to third at the flag, and was later promoted to second place when on-the-road winner Jason Plato (Seat Toledo) was excluded from the results for careless driving. Plato had controversially pushed the previous race’s winner, Tom Chilton (Honda Civic), into a big sideways slide and out of the lead.

VX Racing’s other two drivers, Muller and Colin Turkington, were less fortunate than Smith in the day’s second race. Muller was running third, several positions ahead of title rival Neal, when forced to retire on the 13th of the 22 laps with a broken driveshaft circlip, a standardised part provided to all cars in the series; Turkington was running strongly in fifth place in the opening laps when Gareth Howell (Honda Integra) barged into him, putting the Vauxhall out of the race with a damaged rear suspension.

Muller had fared better in the day’s opening race on the 1.6-mile Silverstone National Circuit, making an outstanding start from eight on the grid and moving up to fourth place for eight championship points, whereas Neal was only able to score two points for ninth place. The only other driver who still had a chance of winning the crown, Dan Eaves (Honda Integra) ended his race in a gravel trap after sliding wide at Becketts corner.

Muller also finished ahead of Neal in the day’s third race - fifth, compared to seventh - but the second race retirement cost him dear. Turkington battled for position throughout the first-half of the day’s first race, losing ground when nudged by Howell, and finally coming home seventh, with Smith just outside the points scoring positions in 11th.

"We’ve accomplished one of our objectives by putting the manufacturer’s title out of reach. That’s satisfying given that the Astra Sport Hatch is new this year. We can’t officially be confirmed as champions until we get through Brands Hatch in two weeks, but everyone knows the title’s ours. "Today’s other positive was the great result for Gavin. He’s been trying hard all year and it’s great to see him get just rewards."

"If you make a good start here there’s a long run to the first corner and you can make up a lot of places, which I did in the first race. "In the second race I was ahead of Matt and looking good to take some more points away from him, so it was more or less going to plan, then the driveshaft circlip failed. It’s something that hardly ever happens, so I was unlucky - and Matt was so lucky: when he spun [after being hit by the MG ZS of Rob Collard] he so nearly hit the barriers, but not quite. "We’re a bit down on straight-line speed here, and this circuit has long straights, so fourth and fifth was the best I could do."

"This is the result I’ve been looking for. The car’s balance was good and [in the second race] I managed to hang-on to the frontrunners, getting a tow from them down the long straights. With a couple of laps to go I had a go at getting by Dan [Eaves] and that worked. It’s a long time since I’ve stood on the podium. I was beginning to doubt myself and I think the team were too, so this result is a bit of a relief."

"The opening laps of the first race were pretty hectic, during some of the dicing I was right behind Yvan - but then I got nudged wide by Howell and lost a bit of ground. Howell was my undoing in the second race - he made a late move up the inside and hit me hard on the right rear. Suddenly I was facing the traffic, game over."