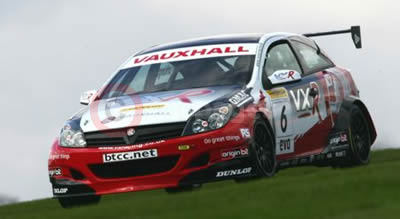 The new VX Racing Astra Sport Hatch made a successful race debut at the opening round of the Dunlop MSA British Touring Car Championship at Donington Park this weekend, with Yvan Muller claiming the car's debut win, one second and one third place. Gavin Smith put in some strong performances on his race debut for VX Racing, and recorded his best-ever BTCC result in the final race of the day, but Colin Turkington suffered a run of bad luck with a collision and rare mechanical problems.

VX Racing arrived at Donington Park with a new car and driver line-up, but was on the pace from the outset. New recruit Turkington edged out Muller to pole for the first race, but it was the Frenchman who finished the race on the podium, only narrowly missing out on giving the VX Racing Astra Sport Hatch a win on its race debut. Turkington slipped back to fifth, struggling with a car set-up for colder conditions. Smith endorsed the reliability and performance of the car, lapping consistently to finish eighth on his VX Racing debut.

The team didn't have to wait long for its first victory of the 2005 season, as Muller held off strong competition to bring the VX Racing Astra Sport Hatch home at the front of the field in the second race. The Frenchman completed a hat trick of podium finishes with a third place in the final race after a storming charge through the field from ninth on the grid. The former BTCC champion was pleased with the weekend's progress; "It's a good start to the season, we can be pleased for two reasons; first we won a race and had three podium finishes, and second because we have learnt a lot during the weekend. Now we have to analyse the information and come back with some new ideas for the next race."

Turkington's unfortunate race fortunes continued as he was pushed off onto the grass on the first lap of the second race and retired to the pits immediately. Starting from the back row of the grid for the third race, he got a good start and moved through the field to seventh position, but dropped back to eighth after developing steering problems in the mid stages of the race. The 23-year-old Irishman summed up his ultimately disappointing weekend; "The weekend started out well for me, I had a good qualifying session, the car was quick then, but it didn't go my way today."

Smith continued to impress with his race form, but despite gallant efforts in the second race, he was forced to settle for sixth position as the door remained firmly closed by the fifth-placed Plato. Smith got the better of Plato in the final race of the day as he cleanly passed the Seat driver on his way to fifth position; his best-ever BTCC race result. "When I did the first practice session yesterday morning, I said to myself that I was going to have a top six finish in one of the races, so to get two top six finishes was more than I could ask for. The next time I'll be aiming for a little bit higher, maybe even a podium."

Stuart Harris, VXR Brand Manager, was pleased with the debut of the VX Racing Astra Sport Hatch; "Overall it was a good weekend for Vauxhall. After the first race we still had a long way to go, it's a new car that we are still developing, but to be in the hunt right from the start is fantastic. Yvan drove really well, and it would have been good for Colin and Gavin to be a bit further up, but we'll just have to wait and see what happens at Thruxton."

Today's race debut of the VX Racing Astra Sport Hatch marked the on-sale date of the Vauxhall Astra Sport Hatch, the road-going cousin of the BTCC car. The VX Racing team will be aiming to repeat the triple title-winning success of the last four years, and continues its title hunt at the next round of the Dunlop MSA British Touring Car Championship at Thruxton on 30 April.