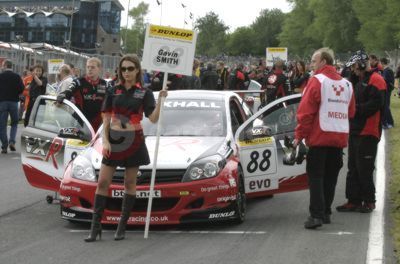 Yvan Muller driving the new-for-2005 VX Racing Astra Sport Hatch ended two months of drought from BTCC wins with a masterful display of driving in the third race of the day at Brands Hatch this weekend to take a convincing win. Muller added his win to a third place and fourth place finish in the two earlier races today.

Team mate Colin Turkington notched up a second place and two fifth place finishes to leave the Kent circuit lying fifth in the drivers championship. Gavin Smith endured a testing weekend with robust driving from his rivals putting him off track a number of times. A tenth place and seventh place finish, as well as a retirement were the outcome for the Irishman in a weekend he would probably prefer to forget.

Muller's victory was a welcome return to form for the VX Racing team. Always in the hunt for podium positions, the team has consistently been a front-running team, but until this weekend mostly lower points-paying positions and smaller trophies had resulted since the first event at Donington Park in April. "I'm really pleased, of course," said Muller "I made a good start, was able to overtake Pickford (the leader) and then keep him behind me, although he has a fast car. I had to put my best into it and I did. I decided before the race, that either I win or I do nothing!"

Turkington was happy to be back on the podium after a second place finish at Thruxton last month and particularly pleased that his car had improved after setting changes made overnight, after a disappointing qualifying that left him seventh fastest. The success ballast added after this success however, hampered Turkington's hopes of maintaining this level of performance for the rest of the day. Smith enjoyed his best qualifying session so far this season recording the fifth best time on Saturday, but in all races he was involved in incidents not of his own making, which pushed him down the field in two races and completely out of the race in the third.

The VX Racing Astra Sport Hatch is in its first year of competition, after the introduction of its sister road car model that launched earlier this year. The three drivers and the VX Racing team have been developing the car since the beginning of the year and are confident that its full potential has not been realised. Stuart Harris, VXR Brand Manager, said of the weekend, "Our results are representative of just how close the championship is this year and just how competitive the grid is. It's good to see one of our drivers back on the top step of the podium and I hope we won't have to wait as long as we have done before we're there again."

The manufacturers' championship, a two way fight between SEAT and Vauxhall, is led by the Luton marque, but although SEAT is only 42 points adrift, the battle remains close. In the drivers' championship Yvan Muller lies third, only 11 points off the leader with Turkington fifth and Smith in ninth. VX Racing lies second in the team championship.

VX Racing will return to the track in two weeks time for rounds 10, 11 and 12 at Oulton Park in Cheshire.