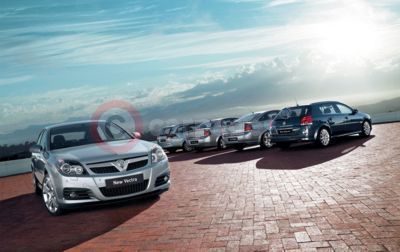 As from 1 October 2005 Vauxhall’s heavily revised Vectra and Signum models go on sale in the UK. The 2006 model year ranges carry the new Vauxhall face pioneered with the VX220, Tigra, new Astra and Zafira models.

New from the A pillar forwards the Vectra range of saloons, hatchbacks and estates and the stretched version, which is the five-door semi executive class Signum, have new bonnets, front wings, the new Vauxhall ‘V’ grille and new bumper with lower front grille designs which vary in style from model to model.

Inside there has been a general upgrading of specification and equipment levels and the use of better looking soft-touch materials for the more rounded facia panels. Vauxhall say the Vectra models in particular benefit from improved new seat fabrics, extra door trim inserts, a redesigned instrument panel and the use of a smaller sporty steering wheel.

An all-new V6, 2.8-litre, twin scroll, turbocharged, 230PS aluminium petrol engine is added to the Vectra and Signum ranges and the 3.0-litre V6 CDTi diesel engined has been revised with lower emissions and power output raised to 184PS. Both ranges now have the option of four petrol engines, 1.8 to 2.8 litres with power outputs from 122-230PS and three CDTi common-rail diesel units from 1.9 to 3.0 litres with 120-184PS power options.

However the real change is in the Vectra’s chassis and suspension department. To make the car more rewarding to drive, right hand drive models for the British market, unlike European Opel models where continental roads, better road surfaces and driving conditions are less demanding, have had significant set up changes.

New anti-roll bars, stiffer mounting bushes, increased damper rates, stiffer steering bushes and UK-specific power steering settings for each engine type, give a consistent feel and performance across the range say Vauxhall. Less suspension wallow and fewer steering corrections during cornering are the result of these changes say the manufacturer. The most popular SRi variants continue to have a stiffer suspension set-up than the base models and incorporate similar changes. The optional IDS-plus chassis with Continuous Damping Control has re-programmed software to further improve driving performance.

In addition Vauxhall have added a high value, low price Exclusiv, (‘exclusive’ without the e), to the Vectra 5-door hatchback and estate model line up. Exclusiv is also available on four of the seven Signum model derivatives. Despite the added value specification, new looks and technical changes Vauxhall say there are no price increases for the 2006 Vectra and Signum models. The Vectra SRi, the most popular variants, are reduced in price by £900. The 1.9 CDTi 120PS and 150PS versions have their diesel engine price premium lowered by £450 to £1,000 over petrol models. All this says Vauxhall reduces benefit in kind taxation for company car drivers.

Over 180,000 second-generation Vectra have been sold in the UK. Annual Vectra sales reached 70,000 units a year just three year ago but due to the declining market in this competitive upper medium sector, sales have levelled off to 45,000 units a year.

Andrew Cullis Vauxhall’s product communications manager said, "The majority of these reduced sales for Vectra has been brought about by their customers switching to the versatile Zafira medium sized MPV range or down-sizing to the new Astra models. We expect the Vectra range to maintain its level of 45,000 annual UK sales and Signum sales are expected to remain at around 5,000 units a year."

He added, "Overall customer loyalty is very high especially for Astra and Zafira models but we need to do more to capture younger customers. The new styling seen with the introduction of the latest Tigra and Astra ranges to be followed by the all-new Corsa at the end of 2006, will do this for us."

Commenting on the significant 28 per cent fall in Vauxhall’s UK sales in August this year Cullis said, "Our retail sales are tracking the performance of the overall market but fleet customers have been waiting for the new Vectra models to arrive. Year to date we are outperforming the overall UK market that has seen sales drop by 5.7 per cent, 3 per cent more than ours. Despite the blip in sales in August Vauxhall has increased its share of the new car market this year to 13.3 per cent." This is marginally behind the market leaders Ford who hold a 14.8 per cent share of the market."