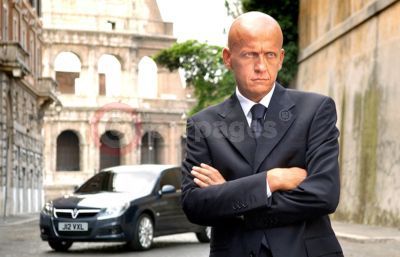 The man who awarded the penalty that took England to victory against Argentina in the 2002 FIFA World Cup is set to take a different kind of control in the run up to the next championship, as the distinctive face of Vauxhall’s New Vectra and New Signum.

Regarded as the greatest football referee in the world, Pierluigi Collina has blown the whistle on his international career, and is set to find a different kind of fame as he takes control behind the wheel in a new series of TV and press advertisements beginning on 1st October - the same day that these two exciting new models arrive in showrooms.

Like New Vectra and New Signum, 45-year old Collina is admired all over Europe, having played a major role in every major international football tournament since 1996.

Thanks to his unforgettable appearance, Collina is forever etched in the memory of most football fans. Not to mention England captain David Beckham, who famously fired home the goal that took England through to the last 16 of the World Cup tournament when it was last held.

Vauxhall’s Marketing Director, Andy Gilson said: "As a referee, Collina has to have everything under control, all of the time. The New Vectra and Signum’s advertising slogan is ‘Take Control’, as the latest version of our mid-size car features intelligent innovations for even greater dynamics, safety and comfort."

But it’s not only through technology that New Vectra and New Signum play their rivals off the pitch. The tremendous value, starting with the all-new Exclusiv model which kicks off at just £14,750 on the road, well and truly shows other players the red card, while Collina himself summed up the new handling and chassis package - specifically developed for British roads - in his own words.

He said: "The Vectra and Signum’s excellent driving dynamics enable a split-second judgement in every situation - just like a referee on the football pitch."