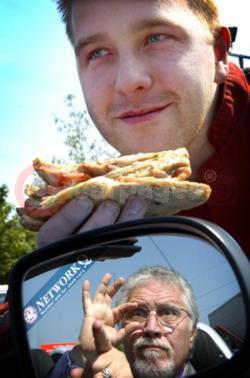 1 in 4 motorists wouldn’t be any the wiser if they bought a used car with a bacon, lettuce and tomato sandwich and Dave Lee Travis included

For many British motorists, bacon, lettuce and tomato sandwiches and veteran DJ, Dave Lee Travis are common extras we can expect to find when buying a used car.

According to a survey of 1,000 UK motorists by Network Q, the UK’s leading used car retailer, car jargon still remains such a mystery that one in four wouldn’t bat an eyelid if offered a car complete with a BLT.

Motorists were given nine examples of common car jargon and asked to identify the correct meaning from four possibilities for each. In each case, there was an option that was a red herring and irrelevant to used cars.

A quarter of motorists believed BLT was a common car term, with most stating it stood for the fictitious ‘brake-lock transmission’. 22% failed to spot that DLT, the common acronym for former Radio 1 DJ, Dave Lee Travis, was a red herring. Instead they believed they’d be buying a car with either a dealer liaised transaction, dual turbo or dashboard lighting.

More than half (56%) of the motorists surveyed, admitted they would try to research the meanings of car jargon before buying a used car. Almost the same number (57%) would take a friend specifically to help with terminology, while 30% claim to understand all the terms and 10% would try to bluff it on a forecourt.

When it comes to incomprehensible jargon, IT professionals were chosen as the worst offenders by 35% of those surveyed. They were followed by politicians (26%), lawyers (13%), estate agents (8%), civil servants (6%) and used car salesmen on just 4%.

According to Richard Hughes, Network Q spokesperson, ‘Jargon is part of everyday conversation but it doesn’t necessarily make life easier. If anyone was offered a car with a DLT included you’d expect them to run a mile. However, there is a danger people can be bamboozled by jargon and we’d always urge them to go to a reputable dealer for peace of mind - or you might get more than you bargained for!’

‘For a full translation of the most common car terms, produced with approval of the Plain English Campaign, you can also visit the latest news section in www.networkq.co.uk ,’ added Hughes.