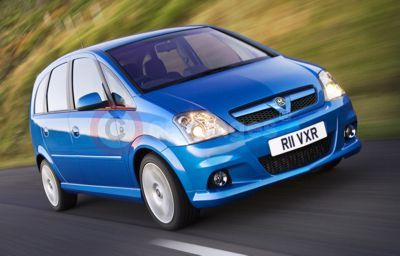 Just when the motoring world thought there were no niches left, Vauxhall have found one - and it’s guaranteed to bring a smile to the face of anyone who likes their cars fast, fun and more than a little cheeky.

The Meriva has been given the VXR treatment to create the world’s first performance mini-MPV - and one of the most-talked about cars of the year. As enthusiasts have come to expect from the VXR brand, the Meriva hasn’t just been given a few tweaks and a tuned engine - Vauxhall has gone the whole hog to make sure that the smallest VXR will be able to hold its own against any modern hot hatchback, and might even be able to give a few supercar drivers a shock.

Under the bonnet is an all-new 1.6-litre turbo petrol engine which produces an impressive 180PS, making it easily the most powerful car in the class. Driving the front wheels through a six-speed close ratio gearbox, it’s enough to take the Meriva from 0-60 mph in around eight seconds and on to a top speed of nearly 140mph.

To cope with the extra power, the chassis has been thoroughly reworked to give the driving dynamics expected of a car carrying the VXR badge on its boot. The exterior styling has been upgraded with reprofiled front and rear bumpers which clearly link the newest VXR to style started with the Meriva’s big brothers - the VXR Astra, Zafira and Vectra models. The Meriva’s smart 17-inch alloy wheels are in the now-familiar six-spoke VXR design too.

Inside, the Meriva VXR retains all the practicality of the acclaimed FlexSpace seating system, but there is a twist which has never been seen before in a mini-MPV. Special Recaro seats hold the occupants, and VXR logos adorn the gearlever, instruments and steering wheel.

The high-performance version of the versatile five-seater will make its debut at the Essen Motor Show later this month (25 November) and will go on sale in the UK alongside other facelifted Meriva models in February 2006. Prices will be announced nearer the on-sale date.