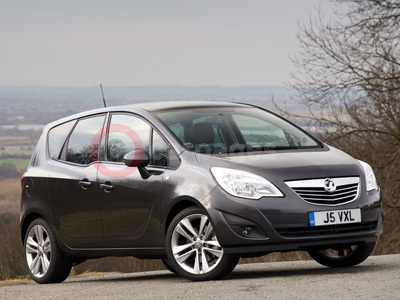 When it was launched in 2003, the Vauxhall Meriva quickly became the epitome of flexible family motoring. It was also the one to beat for all manufacturers of small MPVs.

The FlexTechnology seating was the key to the Vauxhall Meriva's popularity, as illustrated by over 112,000 UK sales since its arrival.

The new Vauxhall Meriva majors on the same principles but has taken it a step further; not just in terms of the adaptable seating arrangements but also with the introduction of rear-hinged doors, at the back. At one time these were known as 'suicide doors' but there is nothing unsafe or dangerous about these!

In traditional Vauxhall (and Opel) manner, this new arrangement is known as FlexDoors and, with the exception of a couple of Rolls Royce models, the Vauxhall Meriva is said to be the only production car to have rear-hinged doors that open independently of those at the front and to have type approval for the system. For the record, the system on the Mazda RX8 differs in that it doesn't have a B-pillar.

Anyone with small children will appreciate the benefits of the FlexDoor system, as it makes it so much easier to strap children and babies into their child seats and carriers, without having to contend with the door. These doors also have the advantage of opening to 84-degrees - a good bit more than the 68-degrees of most conventionally hinged doors. It also makes it easier for the elderly and less-agile passenger to get in and out.

The Vauxhall Meriva has a built-in safety system that prevents children opening the rear doors when the car is in motion and at speeds over 2mph the doors automatically lock and the light in the door handle goes out.

Greater visibility for children in the rear of the car has also been shown to reduce travel- or car sickness, so the designers have introduced a kind of dog-leg into the lower window-line. From the rear quarterlight, the lower edge of the window slants gently downwards, towards the door handle and then kicks up again just before the B-pillar. The drop means a 5cm difference, so the small ones can see out.

At the front, the A-pillars develop into crease lines that define the broad bonnet and highlight the new 'eagle-eye' headlight clusters with their 'wing' daytime running lights. The design line continues and flattens out to frame the chrome, front grille bearing the new Griffin badge.

The Vauxhall 'V' motif and 'eagle-eye' light shapes are continued at the rear, where the body-work scoops out some of the glazed area and forms a pinched 'waist' just above the number plate recess.