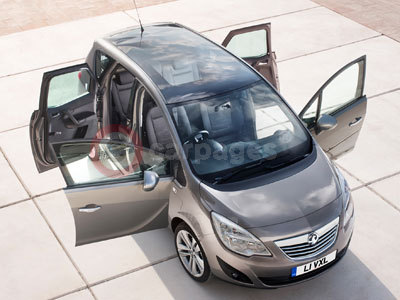 The new Vauxhall Meriva is set to turn the conventional concept of family-car usability on its head with a combination of clever, rear-hinged back doors which radically improve access/egress, and a raft of unique cabin features that boost interior versatility.

The new Vauxhall Meriva, which will be unveiled at the Geneva Motor Show in March 2010, is the first Vauxhall to feature FlexDoors, showcased in 2008's Vauxhall Meriva design concept.

FlexDoors are rear-hinged back doors which swing open towards the back of the car at an angle of nearly 90 degrees, vastly improving the ease with which occupants enter and leave the cabin. Rather than having to step back, or to one side, as one would using a normal front-hinged door, the FlexDoor allows unimpeded forward access/egress to and from the cabin, enhanced further by the Vauxhall Meriva's exceptionally high roof line.

For parents with children, there are further benefits. Due to the larger door opening and free space around the B-pillar, parents can lift small children forwards in to rear-mounted, second-stage child seats without having to contort themselves around a door. And with both the front and rear doors open (the fronts open at a similar angle to the rear FlexDoors) a 'parent-friendly' zone is created with no door barrier between front and rear occupants.

Crucially, the FlexDoors can only be opened by occupants while the car is stationary, an automatic lock engaging as soon as the car pulls away.

Once inside the new Vauxhall Meriva, buyers benefit from two further groundbreaking innovations. The FlexRail adopts a completely fresh approach to the design of a car's centre console, and provides owners with a variety of modular storage and comfort solutions that fix on to an ingenious dual-rail base. The new Vauxhall Meriva's storage bin and cubby count has also increased, meaning that owners now benefit from one of the most practical cabins in class.

The new Vauxhall Meriva's seat comfort has also advanced, with the adoption of front seat technology from the Vauxhall Insignia and Vauxhall Astra. Like these cars, the Vauxhall Meriva offers the biggest range of seat adjustment in class, extending to 240mm in length and 65mm in height.

The current Vauxhall Meriva effectively created the compact monocab sector when it was launched in 2003, but since then Vauxhall's design language has evolved steadily, with big strides being made with the European Car of the Year-winning Vauxhall Insignia and more recently with the launch of the all-new Vauxhall Astra.

No surprise, then, that the new Vauxhall Meriva has adopted a more expressive and dynamic silhouette to its basic cab-forward monocab design. Like the Vauxhall Insignia and Astra, a 'blade' features down the side of the body, complementing a window line with a distinct 'wave' accentuating the FlexDoors, allowing panoramic views for rear passengers.

The design theme continues in the Vauxhall Meriva's cabin, with cues taken from the Vauxhall Insignia and Astra enhancing the perceived quality of the materials.

With a longer wheelbase and wider front and rear tracks, buyers will see a marked improvement in the new Vauxhall Meriva's ride and handling qualities.

They'll also see a reduction in running costs, since the engine line-up - which features six turbocharged units and power outputs from 75 to 140PS - benefits from an average fuel consumption/CO2 reduction of 15 per cent, or -25g/km across the range. A high mpg/low CO2 ecoFLEX model will also be available.

More information will be available closer to the Vauxhall Meriva's debut at Geneva.