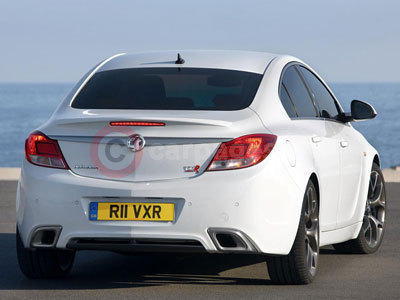 Vauxhall tells us that the Vauxhall Insignia VXR's exterior design takes its cues from the GTC concept car that was first shown at the Geneva motor show in 2007. So, what we have is a much deeper front bumper than the standard model, with large, leaf-shaped mesh grilles either side of the central grille. The design of this main air intake has been simplified by removing some of the vanes from the lower area leaving just the large signature band and a single slat, both of which are chromed. The eye-like headlight clusters remain the same, as does the large bonnet with its distinctive crease down the middle.

This design line is carried over to the rear of the car where a somewhat reserved spoiler is integrated into the boot or tailgate. Below, a very large bumper houses the two chunky, matt-chromed, exhausts.

For those that need it, there is plenty of space in the Vauxhall Insignia VXR's boot and even more in the estate: 500-litres in the hatch, 530-litres in the saloon and 540-litres in the Sports Tourer. The latter is also said to be the fastest estate that Vauxhall has ever produced and also the first to have Adaptive 4x4 and an electronic limited slip differential.

And now we're getting to the heart of the matter - performance. Under the ample bonnet of every Vauxhall Insignia VXR lies a 2.8 V6 petrol engine, which for a performance saloon etc. doesn't seem that large. However, add in a twin-scroll turbocharger and it produces 325PS at 5,250rpm and 435Nm of torque, peaking at the same engine speed. The swift throttle responses are illustrated in the 0-60mph time of 5.6 seconds with the estate taking just a fraction longer at 5.9 seconds. And all versions have a limited top speed of 155mph.

The Vauxhall Insignia VXR's straight-line speed and acceleration is nothing short of impressive; some might say scary. Bearing in mind that the engine is the same unit found in the V6 Elite Insignia but in the VXR it has been tweaked to produce a 25 per cent increase in power and 9 per cent more torque.

All of this is no good unless the drive gets to the appropriate wheels and those wheels stay on the road. So, the Vauxhall Insignia VXR comes with Adaptive 4x4. It functions in much the same way bas the system in the standard cars but it has been adjusted to cope with the extra performance.