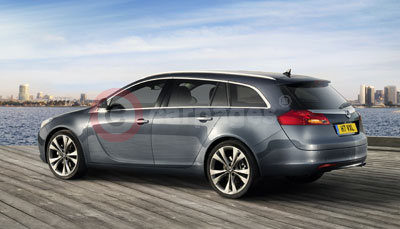 These are the first official shots the new Vauxhall Insignia Estate, which will debut at the Paris Salon on 2nd October 2008.

Known as the Insignia Sports Tourer, it will be available to UK buyers in the second quarter of 2009 and will feature two new engines – a more powerful turbodiesel and a smaller capacity turbocharged petrol unit – in addition to the five powerplants available from launch in the saloon and hatchback models. An ecoFLEX Sports Tourer with competitively low emissions and fuel consumption will also be available in the near future.

Mark Adams, Vice-President of GM Europe Design, described the Sports Tourer’s design as athletic, powerful and elegant. “However,” says Mark, “this is a stand-alone model and not simply an estate version of the saloon. In fact, all the bodywork aft of the B-pillars is unique to the Sports Tourer. We’ve also ensured that its design combines the sculptural artistry and technical precision found in the saloon and hatch models.”

Designers gave the rear of the Vauxhall Insignia Sports Tourer a unique, yet cohesive appearance by pulling the wraparound tailgate deep in to its flanks and accentuating it with large, fully integrated tail lights.

Inside, as with the Insignia saloon and hatch, the Sports Tourer has ample room for five adults and one of the best loadspace volumes in its class. (Full dimension and capacity details of the loadspace will be revealed at the Paris Auto Show in October 2008.) Despite this, Vauxhall has retained the hatch and saloon’s wheelbase (2,737mm) and added around 80mm to its length.

The new petrol and diesel engines available in the Sports Tourer will complement the Insignia’s existing line up of three petrol and two diesel units, including the 130 and 160PS 2.0 CDTi which achieve 58.9mpg on the extra urban cycle, the 220PS 2.0i Turbo, and the 260PS 2.8i V6 range-topper, capable of powering the Insignia from 0-60mph in 6.7 seconds.

Like the Insignia hatch and saloon, the Sports Tourer will also be available with front- and all-wheel drive, as well as Vauxhall’s FlexRide system with its Adaptive Stability Technology.

The new estate model will also benefit from the high levels of technology showcased at Insignia’s launch, such as Vauxhall’s latest generation Adaptive Forward Lighting (AFL), with its nine light beam settings, and the Front Camera System, which can read and memorise road signs and alert drivers if they unintentionally veer off the road.