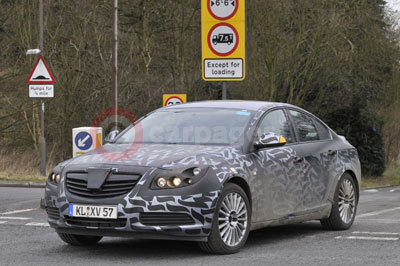 Camouflage and disguise are crucial when new model prototypes first leave the well-protected confines of the design studio or workshop and head out onto the test track or open road. Although a great deal of today’s vehicle proving can be conducted in advance by computer simulation or on the test bench, there inevitably comes the day when all test results have to be validated, and the car must be released into its natural habitat - the road.

Now it’s the turn of Insignia - Vauxhall’s new mid-size car that debuts at the British Motor Show on July 22nd - to take to the public roads. With a highly attractive, completely new body line and sculptural design, Insignia is set to cause a sensation in its class - but surprises only work if they are not revealed beforehand.

The team responsible for camouflaging prototypes began making their preparations for the test phase when the new car first progressed beyond computer simulations and clay models. Together with chief designers and engineers, the team established which of the car’s characteristic lines should be kept hidden the longest from prototype paparazzi.

Together, they developed a “facelift” for the upcoming model that would disguise the prototypes as much as possible. One of the variants had an especially elegant, flowing rear section, for instance, so a pronounced spoiler was designed to mask it. A wooden model was built as a cast to form the plastic camouflage parts needed for around 200 test cars that have to be disguised in the run-up to series production.

Covers for other characteristic body components were also designed and produced using the same process. As always, the first prototypes were brought to a workshop in a particularly well protected area to be disguised as the initial test cars.

First “facelift” should make Insignia as ugly as possible

For this part of the camouflage operation, experts use special adhesive and foil, which ensures a smooth surface and remains flexible and tear-proof at temperatures ranging from minus 40 to plus 70 degrees Celsius. In other areas, the foil is shimmed with foam to change the car’s contours. This adhesive material is also used to camouflage characteristic window lines.

Small, highly contrasting covers are fitted to obscure other prototype body surfaces. For years, the practice at Vauxhall/Opel was to use a black and white chessboard pattern, but this has now been replaced by “Fishies”, rounded, fish-shaped diamonds designed to confuse camera lenses and spying eyes. This disguising job will soon be done even better by Flimmies, a new type of camouflage whose pattern creates a flickering effect.