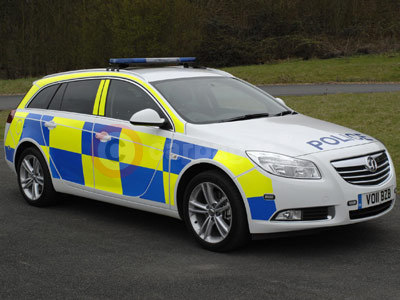 Held at the British Embassy in Paris and welcomed by the Ambassador, an invitation-only biennial event included the attendance of the Head of procurement for French police, Thierry Robin, and Chief Inspector of the Association of Chief Police Officers Intelligent Transport Systems (ACPO ITS), Mick Trosh.

The invitation was a result of Vauxhall exhibiting the SVA-equipped Vauxhall Insignia at the Home Office Scientific Development Branch show. SVA provides a standardised specification to which all manufacturers and suppliers can adhere, allowing them to produce common wiring for equipment and connection points in police vehicles. The deputation of French police was so impressed with the development work, it asked for an immediate demonstration to the full senior French police fleet team.

Manager for Vauxhall Vehicle Conversions, Dick Ellam, said: "It's a great honour to be asked by the French police to demonstrate the SVA-equipped Insignia at the British ambassador's residence in Paris. We were delighted to be able to display and explain the benefits that SVA offers police fleets to such a receptive and influential audience. Vauxhall's partnership with ACPO ITS has already produced industry-leading results and substantial benefits to police fleets across technological standardisation, integration, and equipping and de-commissioning of vehicles, and we look forward to progressing that offering still further."