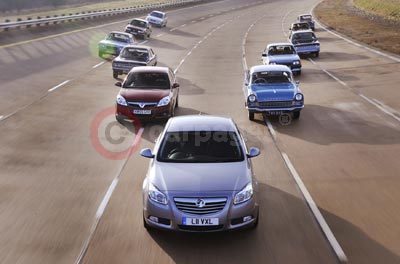 With almost five million post-war passenger cars produced, mainly for the domestic market, Vauxhall can lay claim to have been 'The Wheels of Britain' for more than sixty years now.

And fresh from its recent UK dealer launch, the Vauxhall Insignia - with its raft of innovative features in this sector, such as Adaptive 4x4, Intelligent AFL and FlexRide - can trace its lineage to a host of other D-sector Vauxhalls that British drivers have taken to heart over the years.

Inspired by a 1959 press shot with Vauxhall's model line-up posing on the virgin concrete of a yet to be opened M1, the image was taken on the High Speed Bowl at GM's Millbrook test facility in Bedfordshire.

With Vauxhall's D-sector stars flanking the Insignia in a V-formation, the 1959 PA Velox (to right of Vauxhall Insignia) is the oldest and has perhaps the most radical styling of all. With its lavish chrome-plated grille, tail fins and wrap-round windscreen, the PA became a benchmark for ride quality and style in the market. You could also spec it in pink!

Fins had had their day by the Sixties, though the Victor F-Type's styling and turn of speed were still a breath of fresh air in a market that had grown used to dowdy looking and under-performing rivals in the 1.5-litre engine class. Vauxhall built nearly 400,000 F-Types, many of which contributed to Britain's export drive.

Victors continued to spearhead Vauxhall's mid-size strategy through the Sixties, with the evergreen FC (1964-1967) and the 1967-1972 FD, with its 'Coke-bottle styling', new overhead cam engine and standard front disc brakes on the 2.0-litre version. More than 400,000 FCs and FDs rolled off the Luton production line.

Vauxhall was now riding a colossal wave of success. In the eight years since its opening, the Ellesmere Port plant had produced one million Vivas, and Vauxhall's mid-size range was now rejuvenated with the launch of the new FE Victor. But a revolution was on the horizon, and it was Cavalier-shaped.

Between 1975 and 1995, Vauxhall produced over 1.9 million Cavaliers, mainly at its Luton factory. The Vauxhall Cavalier Mk 1's quality instantly became a class benchmark, and with three engine choices and four body styles available it appealed to a broader audience than ever before.

While a quarter-of-a-million Vauxhall Cavalier Mk 1s were produced up to 1981, the Cavalier Mk 2, with its front-wheel drive platform and the addition of an estate model (from 1983) was an even bigger success. Vauxhall estimated that it would sell 50,000 cars a year, but after only nine months' production, 70,000 cars had found UK homes. From 1998, the Mk 3 rounded off Cavalier production, while spawning a 4x4 model (technology now employed by the Insignia) and the stylish Vauxhall Calibra, with its class-leading Cd figure of 0.26.

Replacing the Cavalier in 1995 was the Vauxhall Vectra, which in its three guises has sold to almost 550,000 UK buyers. And with 15,000 Vauxhall Insignia orders already on its books, it looks like Vauxhall has yet another success story on its hands.