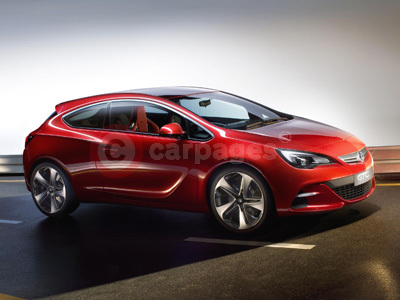 The first official pictures of Vauxhall's GTC Paris Concept have been unveiled, which gives the strongest hint yet to the Vauxhall Astra Sport Hatch's successor and is set to cause a stir when it receives its debut on 30th September 2010 at the Paris Motor Show.

Mark Adams, Vauxhall/Opel's Vice President of Design, has described the Vauxhall GTC Paris as, 'bold, pure and iconic' in its appearance. Vauxhall has hinted that a production version will not stray far from the rakish lines of the concept, and if the GTC moniker were to be adopted, it would be the first time that a Vauxhall has been so named.

At 4.46 metres, the Vauxhall GTC Paris offers ample space for five people, yet still maintains a svelte and sporting appearance. Adams' team has maximised 'tension' in the design by limiting the amount of lines in the car's profile, and leaving the impression that the car's highlights and surfacing are 'pressed' on to the concept's 21-inch wheels.

Vauxhall's signature blade mimics that on the Vauxhall Insignia and creates a fine, tense crease along the rocker panel. This combines with a second line running from the door handle to the rear of the car, emphasising both a fine undercut and broad shoulder. A third line following the silhouette of the roof is finished in fine brushed aluminium accentuating the window graphic and leads to a sharply accented integrated spoiler.

Slim, eagle-eye shaped headlamps, flanked by LED running lights with chrome surrounds dominate the front of the Vauxhall GTC Paris. A sharp centreline crease runs down the bonnet (a trademark styling cue from Vauxhalls of yore) and leads to a dramatically low trapezoidal grille incorporating a chrome emblem bar.

At the rear, the imposing features of the concept are enhanced with LED tail lights, showcasing a long, stretched 'wing' night time graphic.

A four-cylinder, 2.0-litre turbocharged engine, with direct petrol injection and Start/Stop technology is mated to a six-speed manual gearbox, providing drivers with high levels of performance and fuel efficiency.

More details about the Vauxhall GTC Paris Concept will be revealed before the Paris Motor Show.