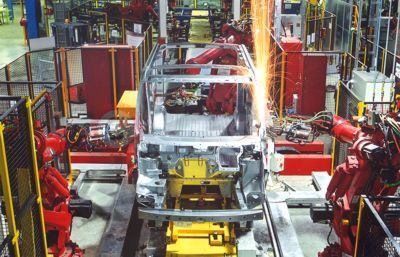 Proving that the British Motor Industry is still very much alive and kicking, both of GM’s Manufacturing operations, at Luton and Ellesmere Port, have smashed previous records for vehicle production.

The plant, which is responsible for making the Vauxhall and Opel five-door Astra, earlier this year also celebrated building its 4 millionth vehicle!

Production has followed sales success which saw the Astra hitting the top of the UK chart five times in 2005, in February, April, May, June and November.

And it’s not just in the UK that demand is high - 64 per cent of the vehicles produced at Ellesmere will be exported to Europe wearing the Opel badge.

Since the start of production in 1964, Ellesmere Port has been the birthplace of some of the UK’s most popular models beginning with the Viva and including the Chevette, Vectra and all five generations of the Astra. It is now one of the largest employers in Cheshire and Wirral employing 3,000 workers with employees working around the clock to meet the demand for Astras.

Ellesmere Port is not the only GM plant setting new production records. In a double whammy for GM in the UK, the Luton plant (formerly known as IBC Vehicles) has also been topping its previous output figures.

The Bedfordshire facility has been producing the multi-award winning Vivaro and its derivatives since the spring of 2001.

This year the plant is on course to produce 90,338 vans, the highest number of Vivaros made since the start of production.

For GM Manufacturing Luton’s 2,000 employees, who have been working three shifts day and night to meet requirements, there is no chance of slowing down, as sales of Vauxhall vans in 2005 passed the 50,000 barrier for the first time earlier this month.

Bill Parfitt, Managing Director of GM UK & Ireland, said, “This is a major achievement for us and could not have been accomplished without the hard work and dedication of our workforce. We are proud to be continuing our tradition of manufacturing in the UK so successfully. Both Astra and Vivaro have been delighting customers across Europe - and building them to the highest standards of quality is a challenge the plants meet every day, week in, week out. Next year we will keep building hoping to break more records for both sales and production.”