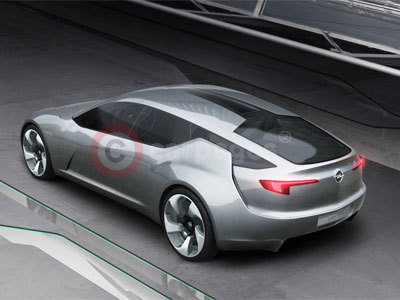 Vauxhall will unveil a dramatic concept car at the 2010 Geneva Show that is set to boost its credentials as a leader in environmental vehicles. The Vauxhall Flextreme GT/E illustrates how extended-range electric vehicle (E-REV) technology can be plugged into large or mid-sized vehicles, as well as compact cars, like the upcoming Vauxhall Ampera.

Vauxhall calls the strategy underpinning Vauxhall Flextreme GT/E, 'e-mobility unlimited', which will effectively adapt the highly efficient E-REV drive system to vehicles across all market segments. In other words, the Vauxhall Flextreme GT/E concept shows that size really doesn't matter when it comes to driving a car with zero CO2 emissions.

Sleek and aerodynamic, the Vauxhall Flextreme GT/E achieves a projected drag co-efficient of just 0.22, allowing it to reach an estimated top speed of 125mph-plus while conserving energy and extending the driving range. Stand-out visual features include a low, wide stance, wing-shaped lights front and rear, a distinctive nose and grille, 'floating' C-pillars and muscular, sculptured bodywork.

The clean frontal styling features a low bonnet line and an extended nose section, which is clasped by wing-shaped, signature LED headlamps, which are in turn carved into the front wings and across the bonnet line. The new trapezoidal grille is slim but bold, with the prominent wing-shaped chrome bar carrying a large Vauxhall emblem, which doubles as a socket for charging the Vauxhall Flextreme GT/E's battery pack.

In profile, the Vauxhall Flextreme GT/E is distinguished by innovative, stubbed C-pillars. This floating design allows the glasshouse to be extended rearwards under the arching roofline, emphasising the flowing lines of the side-body. Vauxhall's signature blade motif is reinterpreted in a swooping swage line from the base of the C-pillar into the lower front wing.

Integral to the Vauxhall Flextreme GT/E's dramatic looks is the efficiency of the design execution. The small frontal area, low roof height (1308 mm) and a flat, enclosed underbody all enable the car to cleave the air with a minimum of disturbance.

The Vauxhall Flextreme GT/E also explores the potential for active shape shifting. At speeds above 30mph, a vertical panel extends along the body from the air extraction slot behind each rear wheel-arch. These 350 mm-long side spoilers guide high-speed airflow around the rear corners of the car, further reducing the amount of turbulence.

The Vauxhall Flextreme GT/E concept also includes the groundbreaking E-REV drive system, already developed for the Vauxhall Ampera. Despite its greater size and a maximum speed of more than 125mph, the Vauxhall Flextreme GT/E is estimated to offer performance similar to that of the Vauxhall Ampera: a battery-powered driving range of up to 40 miles - with zero CO2 tailpipe emissions - and a total range of over 300 miles. Average fuel consumption is estimated at 175mpg, with CO2 emissions of less than 40g/km.

Unlike a hybrid vehicle, the wheels of the Vauxhall Flextreme GT/E are powered at all times by electricity. For typical journeys up to 40 miles, energy is supplied by a T-shaped lithium-ion battery pack located under the floor and rear seat.

However, unlike a battery-only electric vehicle, the Vauxhall Flextreme GT/E eliminates any possibility of range anxiety through fear of being stranded without power. The small petrol engine/generator is seamlessly engaged to provide electricity whenever the battery's supply becomes depleted. In this mode, the driving range is extended to more than 300 miles, until the plug-in battery pack can be recharged or the car is refueled.

The motor in the electric drive unit delivers a substantial 370Nm of instant torque, giving lively performance and projected zero to 62mph acceleration in less than nine seconds.

The Vauxhall Flextreme GT/E concept is a logical next step towards Vauxhall's emerging strategy for the electrification of the car, which will in time include products using battery, extended-range, hybrid and fuel cell technologies.