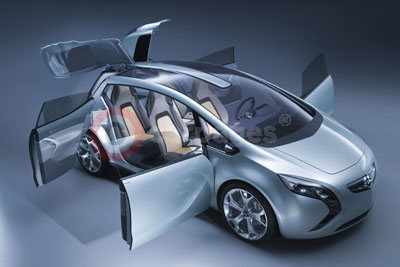 The Vauxhall Flextreme concept car has been recognised by an international jury for its outstanding design and has received the prestigious red dot award in a ceremony in Singapore.

The international red dot design award ranks among the largest and most renowned design prizes in the world. The red dot Singapore prize is awarded to the best design concept "that has the power to improve our world in the future". It is granted to products by an international panel of design experts who base their criteria on degree of innovation, functionality and formal quality. In 2007, the Saab Aero X concept car won the prestigious award.

"The high number of quality entries made this competition extremely challenging and, hence, winning the red dot an exceptional achievement," says Ken Koo, President of the red dot design award in Singapore.

The Flextreme was conceived at General Motors' European Design Center and premiered in 2007 at the International Motor Show (IAA) in Frankfurt. The car is a study of the future design of the monocab segment, incorporating alternative energy propulsion with fresh, bold styling. Vauxhall/Opel is the European leader in monocabs, a segment it helped pioneer with the Meriva and Zafira.

The Flextreme uses the new design language introduced under the direction of British GME Design Vice President Mark Adams and was first brought to market this year with the Vauxhall Insignia. With rear-hinged 'Flex doors' that enable comfortable access to the interior, a large transparent roof and twin tailgate doors that open from the side and swing upward, the Flextreme embodies Vauxhall's tradition of flexible and practical body concepts with attractive designs.

The concept car features GM's innovative extended-range electric vehicle technology system recently showcased in the Chevrolet Volt. An electric motor, powered by a lithium-ion battery, propels the Vauxhall Flextreme for up to 55 km on electric-drive-only. A 1.3 turbo-diesel onboard engine operates as a range extender and is used to drive an electric generator when the battery's energy has been depleted. The range extender is able to generate additional electricity to power the car for hundreds of additional kilometres.

"We are very pleased to have been awarded this prize," says Adams. "It is confirmation from our peers that Vauxhall/Opel is on the right track of offering bold, dynamic style along with great versatility and innovation."

Red dot awards have been presented to many renowned companies, including Apple, and Nokia. With the granting of this award, the Vauxhall Flextreme will join a variety of products - ranging from kitchen gadgets to electronic devices. Kenneth Parkinson, Vice President of design for General Motors Asia Pacific, accepted the award in Singapore on behalf of the European team.