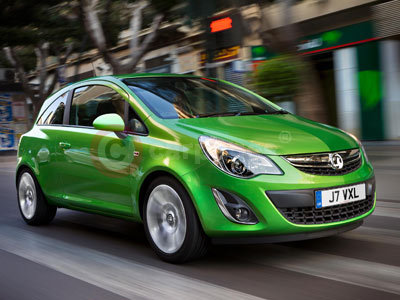 The first official shots of the new Vauxhall Corsa, sporting its fresh new face, trims and colours have been released ready for delivery to first UK customers in February 2011.

Framing the Vauxhall Corsa's new face are 'Eagle-Eye' headlamps, which have also made an appearance on the recently launched Vauxhall Meriva. The units have a chrome finish and include daytime running lights as standard across the range. New chrome-finished fog lamps and housings complete the picture at the front of the car.

Outside, the new Vauxhall Corsa benefits from new 16-inch alloy wheels on both SE and SXi models, while the 192PS VXR receives the option of a new 18-inch alloy wheel, modelled on the design of the optional 20-inch wheel worn by the Vauxhall Insignia VXR.

With its fresh new look, the Vauxhall Corsa is now a very different car to the one on sale a year ago. Before the latest exterior and interior design changes were made, the Vauxhall Corsa had already benefited from a long list of significant upgrades to its chassis and powertrains. For example, certain ecoFLEX engines now feature Vauxhall's Start/Stop technology, which has reduced emissions on the 1.3 CDTi (95PS) ecoFLEX model to just 94g/km, combined with fuel consumption of 91.1mpg on the government's extra urban cycle (78.5mpg combined).

To maintain its success in the small-car class, Vauxhall's engineers also made important revisions to the car's steering and suspension set-ups. Softer springs were employed in the front suspension, mated to an anti-roll bar with new bushes and an increased diameter, improving ride and control characteristics.

Complementing this were revised damper settings all round, an optional re-tuned ESP system and enhanced steering geometry, ensuring that the Vauxhall Corsa remained as pleasurable to drive as it was economical to own.

The new Vauxhall Corsa range starts at £9995, based on 2011's 20 per cent VAT rate. However, setting aside the 2.5 per cent VAT increase, which will apply to all cars from 4th January 2011, new Vauxhall Corsa prices have only risen by between £60 and £75, depending upon model and, reflecting the exterior and cabin enhancements on all models in the range.