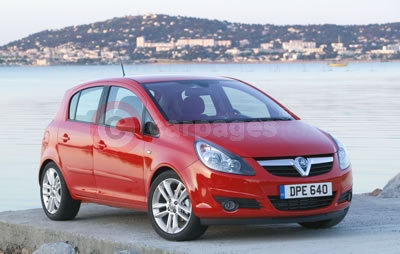 Fun, funky and family-friendly - that’s Vauxhall’s new five-door Corsa! Revealed in these pictures for the first time, the handsome newcomer is set to make its debut alongside the striking three-door at this year’s British International Motorshow in London.

The feisty five-door offers the stylish design and driving dynamics of the sporty three-door model, but with added practicality that makes it more versatile than the average five-door supermini.

The bold, flowing lines of the five-door Corsa have a strong, powerful appearance, yet despite its road presence the newcomer is only slightly larger than its predecessor - 183mm longer, 61mm wider and 52mm taller. It has a deliberately different look to the three-door, which is aimed at a younger, sportier market.

GM Europe’s design chief Bryan Nesbitt said; “Dynamics and functionality are not mutually exclusive. Our new five-door Corsa, like its big brother Astra, renders a completely unique design for the three-door versus the five-door. In short, these are tailor-made cars for different types of customer.”

Inside, New Corsa five-door inherits the stylish cabin design of the three-door, with the same translucent dials on some models and an equally smart fascia. As well as more passenger space than the outgoing car, the boot can carry up to 1,100 litres with the seats down.

The excellent luggage space comes thanks to a clever new system known as ‘DualFloor’, where the load bay can be set on two different height levels thanks to a removable top floor panel. When removed, the top panel can be used as a vertical divider to separate the load bay into two sections, helping to prevent shopping from rolling around the load bay.

A further innovation is ‘FlexFix’ - an integral carrier system similar to that shown on the 2004 Opel Trixx concept car. Available as an option on all new Corsas, FlexFix is pulled out from the rear bumper of the car like a drawer and can safely carry two bicycles, yet completely retracts into the bumper when not in use.

These flexible innovations complement other examples of Vauxhall’s latest technology, which will be offered across the range, including halogen AFL (Adaptive Forward Lighting), Cornering Brake Control and an optional Panorama sunroof.

Five-door versions of new Corsa will have an identical engine line-up to the three-door, with 1.0, 1.2 and 1.4-litre petrol engines, as well as Vauxhall’s award-winning 1.3-litre CDTi common-rail diesel, producing 70 or 90PS. An all-new 1.7-litre CDTi unit with 125PS will also be on offer, and will provide a perfect blend of performance and fuel economy.

Prices and specifications for both three and five-door versions of New Corsa will be announced when the model debuts at the British International Motor Show in July.