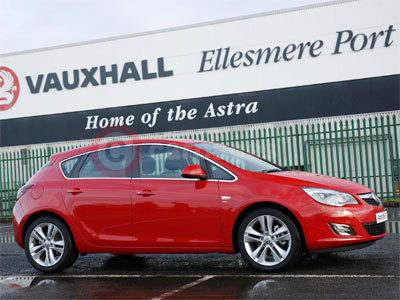 After 30 years, nearly three million UK sales and six generations, the Vauxhall Astra can now lay claim to be one of the Britain's best loved cars, accounting for almost one in 20 of all vehicles currently registered in the UK.

Officially, Britain's best selling UK-built car, the latest Mk6 Vauxhall Astra, launched December 2009, is already selling ahead of projections and has been instrumental in securing production of future models at Ellesmere Port, Vauxhall's main manufacturing plant in the Northwest of England.

Since the first Vauxhall Astra rolled out of a UK dealership in February 1980, over 2.8 million Vauxhall Astras have found UK homes. It's been this popularity which has helped make Britain the lead market in Europe for the Vauxhall Astra, accounting for 25 per cent of all its sales.

It also gained a great image as a drivers' car, spawning the iconic GTE, as well as the later GSi (Mks 3 & 4) and VXR (Mk5), many of which formed the basis for heroic motorsport campaigns in both international rallying and the British Touring Car Championship.

Moving on three decades and the 2010 Vauxhall Astra Mk6 carries the mantle from its predecessors with pride. A driver's car through and through, it features a clever Watt's linkage/compound crank rear suspension design and unique-in-class nine-beam AFL lighting system, highlights which illustrate Vauxhall's continued passion for innovation and bringing new technology to a wider audience.

One thing's for sure, few cars on sale in the UK today have captured the hearts of so many British buyers like the Vauxhall Astra.