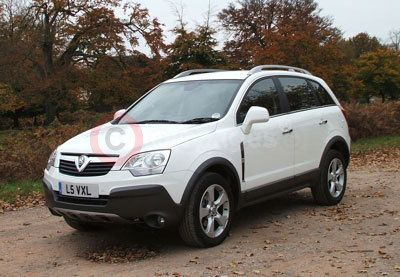 It would seem that we’re losing interest in the huge 4x4s as recently there has been a rash of softer-option, SUVs launched. The sheer numbers, similarity of shape and practical features makes choosing the right one for you a bit of a minefield. Of course, lifestyle plays a big part in the final choice but you have to dig deeper to find the differences that actually make a difference.

Sometimes it's easy. A case in point is the new Vauxhall Antara, which is very, very similar to the Chevrolet Captiva . It isn’t surprising as they both come under the mighty GM umbrella but they aren’t the ‘same difference’. While these two cars share a host of components, they have completely different outlooks. For a start, the Captiva is more of a family car, with seven seats to prove it. The Antara, on the other hand, is a five-seater for grown ups. It has a more sophisticated ambience gained through design and the choice of materials, which wouldn’t look or feel out of place on some of the more expensive metal in this segment.

The Antara GTC (Gran Tourismo Crossover) concept, first seen at the 2005 Frankfurt Motor Show, is the basis of the production Antara. Originally, the design was for an off-road coupe and as the show car was awarded the ‘Concept of the Year’ title by Autocar, it made sense to keep the best bits but make it more accessible. The robust features such as the heavily creased bonnet, side air intakes and skid plates have been retained and the result is a reasonably priced vehicle that looks expensive.

The skid plates aren’t merely for show, as the Antara has an on-demand, four-wheel-drive system called ITCC - Intelligent Torque Control Coupling. The system is much lighter than a chunky, permanent 4WD setup, which helps with fuel consumption and manoeuvrability, while offering extra grip when it’s needed. Under normal driving conditions, the Antara is simply a front wheel drive car but at the first sign of loss of traction, some of the torque is distributed to the rear axle, up to a 50:50 ratio.

As with most so-called soft-roaders, The Antara is reasonably capable off-road as long as the going doesn’t get too tough. The ramps and departure angles of 14- and 16-degrees, respectively indicates that it isn’t suitable for serious adventures and muddy, rutted tracks are driveable just so long as you remember that the maximum ground clearance is 20cm.

Like the Captiva, the Antara has a DSC button on the centre console. The Descent Control System works at speeds of up to 30mph. Faced with a steep, slippery slope, the driver simply stops the car and selects first gear or ‘D’ and lets the car roll forward a little before pressing the DCS button. In doing this the system holds the descent speed at 6mph by braking the front wheels. At slightly higher speeds, the DCS can be activated by pressing the brake pedal, at which point the speed of descent is reduced to 10mph. It also works in reverse gear, where it restricts the speed to 5mph.

Vauxhall Antara Images may not be UK specification cars. Colours and exterior and/or interior elements may differ from actual models.