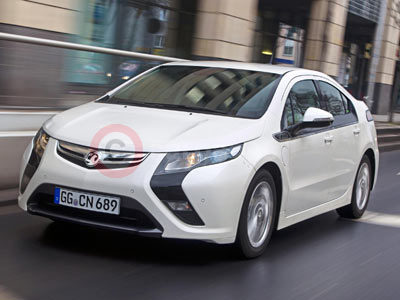 A trio of Vauxhall's spanning 100 years of innovation by the company will star at the Goodwood Festival of Speed from 2nd - 4th July 2010.

While Vauxhall has yet to confirm its launch of the new Vauxhall VXR8, the latest HSV GTS E2 - its near-identical Australian sibling - will give the clearest indication yet of its intention to sell the car in Britain. The new super-saloon will appear as part of the Festival's First Glance/Supercar group, and in a glorious counterpoint, its oldest Vauxhall predecessor, the 3.0-litre Prince Henry - acknowledged as Britain's first true sports car - will be chasing it hard up Goodwood's treacherous hillclimb.

Also making its public show debut in the UK will be the first prototype of Vauxhall's groundbreaking Vauxhall Ampera E-REV (Extended-Range Electric Vehicle), which will complete a two-week promotional tour of the country at the Festival by following in the wake of the GTS and Prince Henry up the hill.

Provisionally planned for launch in the near future, the new Vauxhall VXR8 will continue its giant-killing tradition, with a 6.2-litre V8 producing 431PS, rear-wheel drive and the potential to hit 60mph in just 4.9 seconds. As well as sporting a comprehensive facelift, the new car features Magnetic Ride Control (MRC), revised suspension, launch control and the ability to smoke its tyres and drift like few others.

Which is something that Vauxhall's chief engineer, Laurence Pomeroy, may well have frowned upon in 1910, when he entered three of the company's C10 models in the Prince Henry Trophy. The cars survived the 1230-mile trial, and thanks to their durability, agility and 90mph top speed, the production car they spawned became known as the 'Prince Henry', and Vauxhall's Festival car is one of the earliest of nine survivors.

But Vauxhall's presence at Goodwood this year also illustrates the company's obsession with future innovation. No car typifies this more than the Vauxhall Ampera, which with its constant electric drive, 350-mile range, family-friendly practicality and 175mpg potential marks it as one of this decade's most revolutionary cars. As well as seeing the car drive up the hill, visitors can get an even better insight into its technology, thanks to a display car and chassis housed in the FoS-TECH Pavillion.

Vauxhall Ampera Images may not be UK specification cars. Colours and exterior and/or interior elements may differ from actual models.