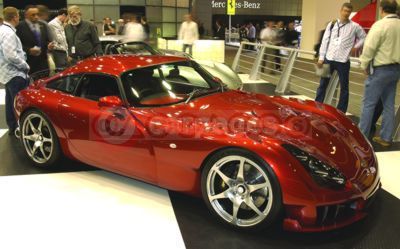 Having launched the exciting new Tuscan 2 and Sagaris on press day of the Birmingham Motor Show, just under three weeks ago, TVR enjoyed huge sales during the course of the show and the new models are now sold out until next spring. “At one point, we were taking orders for three weeks of production everyday,” said Ben Samuelson of TVR.

“We suspected it might be good when we started selling cars on the morning of press day, but to return to Blackpool with over 150 orders exceeded even our expectations.”

Tuscan 2 and Sagaris then headed straight from Birmingham to Le Mans where they were to be exhibited while the two TVR T400Rs, owned by Gareth Evansand run by his racing team, Synergy Chamberlain Motorpsort, were entered in the most gruelling race in the global calendar. The Number 89 car was driven by Bob Berridge, who helped Gareth run the team, Michael Caine, Sales Manager for Essex TVR dealer Castle and Carlube TVR Challenge regular Chris Stockton. The Number 96 car was driven by Gareth himself alongside British GT TVR drivers Lawrence Tomlinson and Nigel Greensall.

From their first appearance at scrutineering on Tuesday, it was evident that the purple racing TVRs had a huge fan base. With fifteen hundred TVRs in the campsites and car parks of the circuit, there appeared to be more TVRs than anything else down there, but the neutrals, especially the British, had also adopted TVR and the cars were cheered on every inch of the way by thousands of fans dressed in TVR purple.

If in doubt check with your local TVR dealer as car prices and technical data will have changed since 2004.

TVR Sagaris Images may not be UK specification cars. Colours and exterior and/or interior elements may differ from actual models.