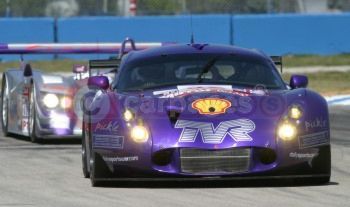 In an extraordinary move, TVR will be transporting one of their 200 mph Le Mans cars through the night from France in order to exhibit it at The Daily Telegraph Motorexpo, running 14th - 20th June at Canary Wharf. Two identical TVR T400Rs will be competing in the Le Mans 24-hour race, which doesn’t finish until 4 pm on Sunday 13th June. One of them will be whisked straight back to the UK for the show and will be on display, still covered in the flies and track dust from the world’s most gruelling motor race. The TVR Le Mans car is very kindly being lent to the show by its owner and one of TVR's team of drivers, Gareth Evans.

This will only be the third time in the company’s 57-year history that TVR has competed at the Le Mans 24 hours race. Last year TVR proved an enormous hit with the crowds and the whole squad are hoping for strong finishes this year.

TVR will also be exhibiting the stunning new Tuscan 2 Convertible, which has never been seen before in London. It had its world debut only a week ago and the only one in the world will be on display at The Daily Telegraph Motorexpo. Demonstrating TVR’s commitment to the show, they will also be bringing the first production Sagaris to go down the firm’s Blackpool production line.

The Le Mans T400R will be on display in one of the Motorexpo's new exhibition areas - the stunning new East Wintergarden. Other exhibits located in the East Wintergarden will include Land Rover's Range Stormer, the Renault Wind, the Lexus RX400h and the Jaguar RD6. The Tuscan 2 and the Sagaris will be in the Tower, One Canada Square.

The Daily Telegraph Motorexpo will feature more than 250 cars and bikes from over 50 motor manufacturers. With over 200 shops, bars and restaurants at Canary Wharf, the Motorexpo offers a complete day out for everyone. For further information on the show, or to subscribe to regular news updates, please visit www.motorexpo.com

If in doubt check with your local TVR dealer as car prices and technical data will have changed since 2004.

TVR T400R Images may not be UK specification cars. Colours and exterior and/or interior elements may differ from actual models.