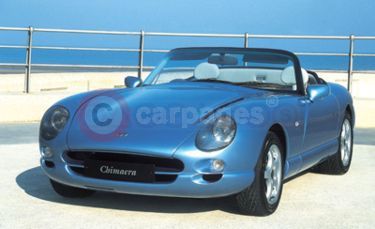 The TVR Chimaera was introduced at the 1992 Birmingham Motor Show and was instantly hailed a success. Based on the award-winning Griffith, the Chimaera went into production in February 1993, then fitting into TVR's model line-up between the V8S and the Griffith.

The name Chimaera refers back to Greek mythology, which speaks of a fire-breathing monster thus named with the head of a lion, the body of a goat and the tail of a serpent.

The Chimaera is powered by a 285 bhp 4.5 litre engine with the option of the 320 bhp powerplant out of the Griffith 500. This gives effortless performance, which fits the Chimaera's dual role of Grand Tourer and sportscar.

New at the 1996 Motor Show was a subtly revised Chimaera with a fresh nose and tail which brought it into line with the Cerbera. In addition, it now featured much of the extraordinarily high quality aluminium switchgear from its 2+2 sister as well as door opening buttons under the door mirrors. For 2001, the car had a revised front end again with covered headlights as well as having Cerbera seats fitted and the full complement of TVR’s much praised aluminium switchgear.

While still very much a sportscar, the Chimaera is more of a grand tourer than any other model in the TVR range with somewhat more benign handling characteristics and a larger boot. However, the Chimaera's handling has not been left to chance with a chassis developed directly from that of the racing TVR Tuscan. With strong ventilated disc brakes all round, the Chimaera stops as well as it goes.

It takes TVR’s craftsmen 450 man hours to build every Chimaera and the attention to detail is immediately obvious from the hand stitching of the leather seats to the shine of the burr walnut dashboard. The switchgear is machined from the highest quality billet aluminium and so proud is TVR of its manufacturing process that every customer is encouraged to visit the factory to see his or her car being built.

If in doubt check with your local TVR dealer as car prices and technical data will have changed since 2002.

TVR Images may not be UK specification cars. Colours and exterior and/or interior elements may differ from actual models.