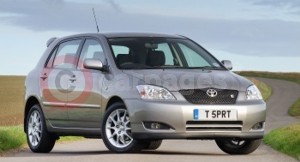 Double honours for Corolla in The Marketing Society Awards

True to its status as "a car to be proud of", the British-built Toyota Corolla has collected two more prestigious awards. This time it is the marketing campaign for new Corolla that has been honoured in The Marketing Society 2003 Awards.

Toyota won the Brand Revitalisation title for its inspired and successful campaign to relaunch Corolla. As a category winner, it went on to collect the society’s top award for marketing excellence, the Grand Prix. The awards were presented at a ceremony in London on 3 June.

The new Corolla is no stranger to success, being named Car of the Year 2002 by What Car? magazine and taking the Marketing Strategy of the Year Award in the 2002 National Business Awards.

The judging panel, comprising top industrialists, marketers and academics, praised Toyota for its fundamental understanding of its target customers, the consistent application of its customer insight in all its communications and the simplicity of the campaign which struck a chord with consumers.

Central to the £20 million strategy was a sequence of five television advertisements, supported by posters and media ads. Developed by Toyota GB’s marketing team with Saatchi and Saatchi, it also included a powerful internal marketing strategy to inspire staff and Toyota dealers, direct mail, interactive television and internet features, promotional activities and special events, such as a season of drive-in movies.

Paul Philpott, Toyota’s Commercial Director, said: "We launched the Corolla as a car to be proud of and it has been true to its word. The Marketing Society Awards are a great honour

for a campaign that succeeded in giving a fresh and more vibrant perspective to a product that is central to Toyota’s growing market success.

"The response to the campaign speaks for itself. Sales of new Corolla have grown strongly and the model has achieved a more youthful and aspirational image."

In 2002, Corolla’s first year on sale, retail sales rose by almost 37 per cent on the previous year, delivering a 4.4 per cent share of the pivotal C-segment for compact hatchbacks and saloons. Profitability was also increased, with a greater proportion of high specification models being sold.

Continuing sales growth this year has contributed to Toyota’s unprecedented decision to start a third production shift next year at its UK factory at Burnaston, where hatchback Corollas and new Avensis models are built.

Corolla is available in three and five door hatchback, saloon, estate and versatile Verso compact MPV body styles with a choice of 1.4, 1.6, 1.8 and turbocharged 1.8-litre petrol engines and 89 and 114bhp 2.0-litre D-4D turbodiesel units. With the recent addition of the 2.0-litre 114bhp D-4D engine to the range, all engines now comply with the 2005 Euro 4 emissions standards.