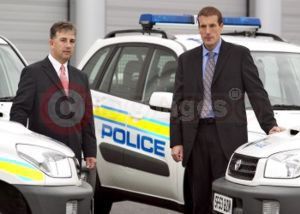 Strathclyde Police has switched its fleet of 30 divisional unit beat four-wheel drive vehicles to Toyota RAV4s. The force took the first of nine diesel-powered five-doors in 2003, with more to follow as its previous Land Rover 90 and Freelanders come up for replacement over the coming years.

The move follows an evaluation in which police drivers were given four makes of 4x4 and asked to report on which was best suited for their purposes. Strathclyde Police covers not only the city of Glasgow but also an extensive and often rugged rural hinterland, so flexibility and reliability are vital considerations for any beat car.

Drivers reported that the RAV4 had good all-round capabilities. It had a powerful, willing engine, handled well with good manoeuvrability, and was enjoyable to drive. It offered enough room for four people, had good equipment levels and visibility and readily accessible controls. "The drivers also returned fuel consumption of 38mpg over the period of the evaluation, which I think is very good," said Fleet Manager Ron Dickson. "They scored all four vehicles on a whole range of points – the lowest received 35 per cent and the RAV4 was the highest with 61 per cent."

The RAV4s, which are purchased outright by the police, are finished in Strathclyde regional livery and equipped with standard ‘blues and twos’ for patrol work by its internal commissioning team. The vehicles are expected to cover up to 120,000 miles over three or four-year cycles.

In 2002 Toyota Fleet launched its Bluelight Blueprint initiative, designed to tailor its vehicles for the specific needs of different branches of Britain's emergency services. The programme is designed to help such services meet strict Home Office guidelines within a highly competitive pricing structure and best-in-class cost of ownership on featured models.

The RAV4, which has been used as a rapid-response vehicle by Derbyshire Police for some years, is one of the models highlighted by the programme.

"We are very pleased that Strathclyde Police has shown its confidence in the RAV4 following its successful initial evaluation," says Toyota Fleet's General Manager Jon Pollock. "These vehicles will have a tough job to do but we feel sure that they will live up to expectations."