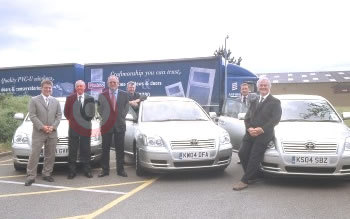 Rapid nationwide expansion and unfortunate experiences with previous cars has led a major plastics supplier to rationalise its vehicle fleet – and it has started by placing its first orders for Toyota cars.

Plastmo Profiles, based in Northampton, is one of the foremost extruders of PVC profiles. Over 40 years its trade customers have installed millions of windows, doors and conservatories made from its products throughout the UK and Continent.

A management buyout of the company last year was followed by acquisition of groups of companies in the south of England and in Scotland. The resulting group has some 420 employees and a fleet of 70 field sales and technical support vehicles.

"Following our expansion north and south we needed to review our fleet policies," said Logistics & Purchasing Manager David Lancaster. Drivers had previously been able to choose vehicles of any make, and the company had experienced major problems using dual petrol/gas-powered vehicles at Northampton: "They actually cost us more in the end – they spent most of their time in the garage because they were always using petrol rather than gas!"

A review was carried out to establish a new company car policy. "We were looking for cars with low emissions to help our staff on tax; reliability and build quality, which we knew were good with Toyota; a reasonably prestigious vehicle but at a competitive cost; and, especially after the dual-fuel experiment, the good fuel economy available with diesels, which we know we're safe with," said Mr Lancaster. "In the review Toyota came out better than most."

Plastmo Profiles had previously used Toyota Hiace vans for its cleaning teams. "We had had a good experience with them," said Mr Lancaster. An Avensis was put through its paces for several weeks by sales and technical staff at Northampton. "They were all pleased, particularly to find that it was a comfortable car to drive, as drivers had suffered from back problems with the previous vehicles," said David Lancaster.

The comfort factor was vital as the Toyotas will be worked hard - they are expected to cover 120,000 miles over the next three years. They are leased from fleet-management service provider ARVAL PHH and supplied through local dealership Sims Toyota of Northampton in partnership with Toyota Fleet.

"It's very important for companies such as Plastmo Plastics to be sure of what they're getting with their hard-working cars, so that they can plan ahead with confidence," said Jon Pollock, Toyota Fleet's General Manager. "Toyota's reputation for reliability and competitive costs, as well as driver appeal, makes its ranges an attractive proposition for fleet customers."