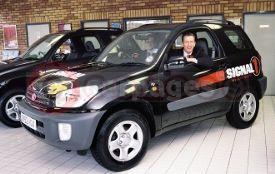 Five Toyota RAV4s will be sending out a strong signal to radio listeners and advertisers in the North Midlands, after being voted onto the media sales fleet of Staffordshire and Cheshire's premier radio station. Members of the Signal Radio sales team were allowed to select the vehicle they felt would best project the station's image – and the one they preferred to drive.

The smart black 4WDs have been signwritten with the station's distinctive 3D logo, featuring a pair of eyes above the name.

Signal 1 and Signal 2 broadcast to a potential audience of 870,000 across the two counties. FM station Signal 1 provided a springboard to success for artists including Robbie Williams, Caroline Aherne and Anthea and Wendy Turner. It also broadcasts one of Britain's most listened-to breakfast shows. Recently relaunched Signal 2 plays a broad range of music from the past four decades, plus news, sport and outside broadcasts on medium wave. Signal Radio belongs to The Wireless Group, which runs 14 radio stations in Britain.

"The RAV4 is very much the car of the moment with the news that it is outselling the Freelander," said Pinkstones Toyota Commercial Business Manager Martyn Davies. "Residual values are very, very good, which was why Afford wanted it on its contract hire fleet, and Toyota Fleet supported us in putting a good deal together for Signal Radio."

"The look was all-important in deciding on the right car," said Signal Radio's Senior Account Executive Amanda Palmer. "We need to project a sexy image and the vehicles had to look good with the logos on.

"We were looking for something new and the sales team was given the choice. It was an open vote rather than a managerial decision that the drivers wanted RAVs."

"Factors such as whole-life costs and reliability will always be important, but for many media-based fleets such as Signal Radio image has to be of prime importance," said Jon Pollock, General Manager, Toyota Fleet. "These vehicles will be seen all over the region by existing and potential listeners, as well as by the advertisers who support the station, and we're delighted that the sales team considers the Toyota RAV4 right for the job."