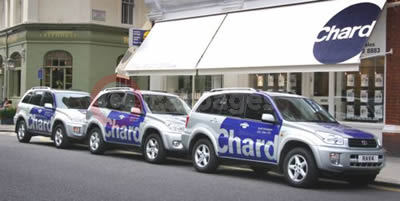 Smart silver RAV4s bearing blue Chard logos are becoming a familiar sight in west London, as the fast-expanding estate agency switches its teams of negotiators to the Toyota 4x4s.

Chard had used some RAV4s in what was a mixed fleet since 2001, but with the recent addition of a sales division to its original lettings business it has decided to concentrate on Toyota vehicles. It recently took delivery of eight of the cars, all three-door 2.0-litre XT3 petrol automatics, and has three more on order. The fleet currently numbers 20 vehicles but is expected to move towards 30 in the near future. "We doubled the size of the company overnight when we opened up Chard Sales," says Lee Porter, Manager of Chard Management Services. "We had used five-door RAVs on the lettings fleet, and had tested a three-door, so we knew the vehicle and decided to use it to build up the fleet."

Previously staff would be started driving Renault Clios and progress to Audi A3s or VW Golfs, but the Toyotas are now provided as upgraded transport for everyone but management - though company director Andrew Chard foresakes his Jaguar during the day to use a RAV4 for getting around London. "The negotiators love driving the cars, and our insurance claims have gone down substantially, because their vision is so much greater than in previous cars we used, such as the Clios," says Lee Porter. "When we were switching people over I had thought some of them would want to keep their non-logoed cars, but on the contrary, everyone was very keen to get into the RAVs. I've never heard a complaint about them from any of the drivers."

The vehicles also give a good impression of the company, says Lee. Chard negotiators frequently drive clients to view properties, and they can appreciate a specification which includes leather seats, tinted windows and air-conditioning. "Although we have now also taken delivery of three-door cars, even when more than one passenger is carried it’s very easy to access the back seats, and there’s plenty of legspace," she says. The cars are finance-leased through Toyota Financial Services, Lex Meridien and Bank of Scotland and supplied by Westover Toyota of Bournemouth, where the company has its origins. Servicing and maintenance is carried out locally by Jemca Toyota's Fulham outlet, and the replacement cycle is three years / 36,000 miles.