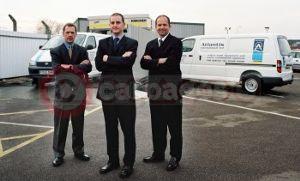 A leading vehicle-wash supplier and a Toyota dealer have come up with a productive two-way arrangement – Atlantis International of Loughborough has fitted and maintains Farmer & Carlisle's carwash facility while the Leicestershire dealership supplies the vehicles for the expanding Atlantis fleet.

Five Hiace 2.4 D4-D long-wheelbase vans and two Avensis estates are the latest addition to the Atlantis strength, which now comprises some 30 of the Toyota vans for its service engineers and eight cars for its field sales team.

The increase in fleet size follows Atlantis' recent appointment as sole UK distributor for Spanish wash/valeting equipment manufacturer Istobal, in addition to an existing equivalent arrangement with Karcher. Atlantis provides turnkey washing installations for everything from cars to trains, and supplies its own water-reclamation systems and leak-testing equipment for motor production lines.

The company has a rapid-response service team on call around the clock nationwide, offering an average response time of just six hours. Its home-based engineers have to carry a comprehensive range of spare parts and consumables to ensure that they can tackle any problem, and use the tailgated vans as mobile workshops.

"We've found that the carrying capacity of the Hiace is better than with comparable vehicles," says Atlantis Chairman David Brain. "Image is also a consideration, but within this service industry reliability has to be the priority.

"We have always been pleased with the performance and reliability of the Toyota range, but more importantly with the quality of service Farmer & Carlisle has provided. Not all our vehicles come back there for servicing, but they have always looked after us," he says.

Atlantis, which supplied the dealership with a Karcher car-wash in 2001, started buying its vehicles there when Mr Brain started the company in 1989. Nowadays it obtains its vehicles on contract hire, with the Hiaces supplied on a three-year/120,000 mile basis.

Mr Brain describes as "very good" the feedback from his drivers. "We've taken engineers on from competitors which don't run Hiaces and never had any negative feedback. They are happy with the vehicles, which is important."

"This is a good example of a Toyota dealership and a customer with a healthy mutual respect for each other's quality of service," says Jon Pollock, General Manager of Toyota Fleet. "We're very pleased that the Hiace vans, as well as the Avensis cars, have proved such a sound choice in a company for which reliability is paramount."