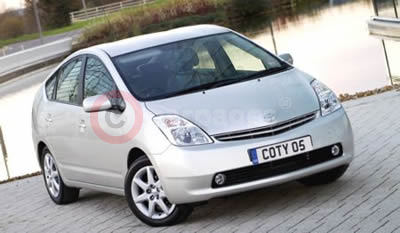 Toyota’s revolutionary Prius has passed the landmark of a quarter of a million sales, confirming its position as the world’s most successful hybrid power vehicle.

The world’s cleanest family car has experienced exceptional global demand, particularly since the launch of the second generation model which went on sale in the UK in January 2004.

For 2005, the sales target has been set at 15,000 units for Europe, while an increase in production capacity will allow 180,000 cars to be sold worldwide.

Earlier this month Prius was named the 2005 European Car of the Year by a 58 member international jury.

Prius, the world’s first mass produced hybrid vehicle, is propelled by the combination of an electric motor and a petrol engine. This unique system, called Toyota Hybrid Synergy Drive, spearheads Toyota’s development of new, environmentally friendly powertrains and is part of Toyota’s effort to create the ultimate eco car.

Prius was also awarded the International Engine of the Year 2004 title for Prius Hybrid Synergy Drive with a record score.

In the UK Prius is exempt from the London Congestion Charge, representing a potential saving of up to £1,250 per annum to a commuter.