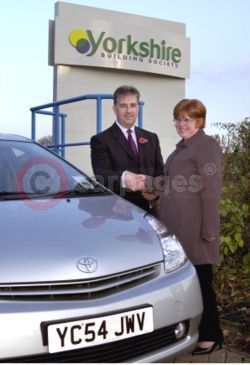 A Toyota Prius, the recently voted 2005 European Car of The Year, has joined the 230-strong user-chooser fleet of Britain's third biggest building society, the Yorkshire - and its driver says she is ‘delighted’ by the move.

The Bradford-based Yorkshire Building Society is strongly committed to its ‘Think Green’ corporate policy, and 12 per cent of its company cars already run on alternative fuels, mainly LPG. By reducing CO2 emissions in its car fleet by 12 per cent, it achieved in just two years the three-year target set by Motorvate, the Government scheme aimed at reducing pollution in car fleets – and became the first organisation to receive Motorvate 5-star accreditation.

The Prius is the Yorkshire's first petrol-electric hybrid, and because of the Society's green credentials its driver, Area Manager June Atkinson, was allowed 15 per cent extra on the normal monthly fee ceiling for her band. There are five bands at the Yorkshire, which leases its alternative-fuelled vehicles through Lloyds TSB, typically on a four-year, 65,000 mile contract.

"I really didn't fancy all the hassles of LPG but the idea of hybrids did attract me," she says. "The Prius was a brand new model and I felt it was modern in looks as well as in what's under the bonnet." June covers around 12,000 miles a year in a combination of town and motorway driving, visiting six Yorkshire BS branches in an area based around Dewsbury, with regular trips to Manchester and Liverpool.

"I wanted a workhorse that would be able to offer the space and economy I need, and I'm delighted with the Prius. It seemed a bit daunting at first, as I had always driven automatics with conventional foot brakes, but in fact it's such a breeze to drive - you don't have to do anything. There's still a novelty aspect at the moment but I think it's always going to be great fun."

She says her husband has also been impressed. "He's had to admit that he's taken by how the Prius shifts between petrol and electric, and by the smooth ride. And I'm certainly getting at least as good economy as I did with the diesel." June also says she is impressed by the interior space offered by the Prius. "I will usually be the only occupant but I think it would take my grown-up family quite comfortably - and though the boot's a little smaller than I'm used to, it will be fine for what I need it for."

Now June Atkinson is hoping that colleagues at the Yorkshire Building Society will think about following her example. "In the future this could be the way for cars to go - and I think Mary's looking at me to be the vanguard!" she says.