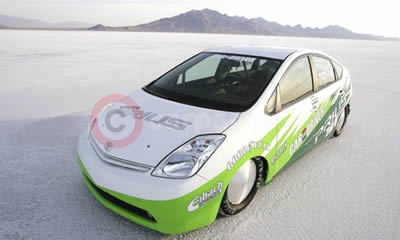 The lean, green Toyota Prius has swapped Sunset Boulevard and the Hollywood Hills for the Bonneville Salt Flats in Utah to set a new world land speed record for hybrid powered cars. The record setting car will be displayed at the Detroit Motor Show in early January 2005.

The green meanie set the mark at 130.794 mph on the three-mile short course using a standard Hybrid Synergy Drive power-train - a mixture of 1.5 litre petrol engine and an electric motor.

An engineering group from Toyota Motorsport in the USA prepared the car by changing the gear ratios (4.32:1 to 3.2:1) and increasing the inverter voltage from 500 to 550 volts. A transmission cooling system was added to decrease the temperature of the inverter and electric motor to maximise efficiency. Ambient temperature on the salt flats was nearly 100 degrees Fahrenheit with nearly 100 degrees humidity. Ice was added between runs to keep the system cool.

The interior of the car was stripped to save weight, a roll cage added for safety and the whole car lowered by five inches to improve the aerodynamics for this highly specialised record attempt. Even the 26 in front and 25 in rear tyres were made especially by Goodyear.

Toyota will display the Land Speed Prius at the 2005 North American International Auto Show in Detroit.

Prius also holds the record as the first hybrid powered car to compete in and finish an FIA-sanctioned event when it ran in the 5,000 mile Midnight Sun to Red Sea Rally in 2002.