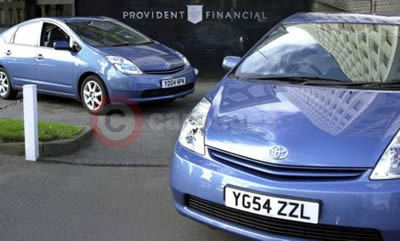 The UK’s leading provider of home credit has enhanced its green credentials with the addition of the first three Toyota Prius petrol-electric hybrid cars to its 700-vehicle fleet.

Bradford-based Provident Financial specialises in both home credit - small personal loans - and motor insurance. It has 1.5 million home credit customers in the UK and Ireland, and almost as many again in eastern Europe. Half a million women and drivers of older and second cars also hold the non-comprehensive motor insurance policies it underwrites.

Company cars for head office and field management staff are provided on a restricted user-chooser basis, and the fleet already includes a large number of Toyota Avensis diesel saloons and Tourers. The first Prius to arrive is now being used by an accident claims inspector with subsidiary company Provident Insurance in Halifax, and the other two are also being used by field staff.

Provident Financial buys its vehicles outright and runs them on a three-year or 60,000-mile replacement cycle. "We pursue quite a strong green strategy, and actively encourage our staff to choose environmentally friendly cars," says Purchasing Manager Stephen Ingham.

"The percentage of diesel cars in the fleet has grown tremendously over the past two years, and now with petrol-electric hybrids, we would expect to see more Prius follow the first three. There’s a lot of competition on the user-chooser list, but certainly the drivers who have taken delivery of Prius so far all tell us they are enjoying driving them."

The Toyota Prius is the world’s most environmentally friendly car, with NOx and hydrocarbon emissions well below Euro IV standard. This doesn’t stop it being a lively performer, with 0-62mph acceleration in less than 11 seconds and 400Nm of torque available from 0-1,200rpm.

Official figures show that fuel consumption of 65.7mpg is attainable in combined cycle driving, while in urban driving the figure is 56.5mpg.