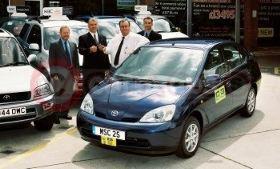 A Toyota Prius has been sold to a private-hire business owner-driver to become the first petrol-electric hybrid car to be licensed for carrying passengers in Britain. And the deal looks likely to grab the attention of the licensed hire trade in and beyond one of Britain's busiest cities, because the buyer is Mark Cartledge, Chairman of the National Private Hire Association, based in Nottingham.

Before completion of the sale, the Prius had to undergo close examination by Nottingham City Council, which would not normally consider licensing a cab with an engine capacity of less than 1.6 litres. Other local authorities have 1.8 or 2.0-litre thresholds.

Nottingham City Council has been trying to get to grips with pollution through imposition of its "Clean Zone" daytime traffic controls, and it was the exceptional environmental friendliness of the Toyota Prius that helped persuade the council to license it for Mark Cartledge as an "experimental vehicle". It will now become part of the 150-strong fleet of the city's DG Cars.

"With the vast amount of traffic we have, Nottingham is training to be London at the moment," says Mark Cartledge. "We'll be doing a lot of 'stationary' and that's where this car comes into play. I think it should be very impressive. The most I can get out of a diesel in these conditions is 39mpg, but we've already had a Prius doing 55mpg.

"Nottingham City Council was very positive because the car promotes the image it's looking for. It's at the forefront in adopting this sort of idea, even though committee members did ask me questions like: 'What happens when the batteries go flat?' and 'Where do you plug it in?'"

The Toyota Prius is self-recharging throughout its life, using part of the engine's output as well as kinetic energy from the wheels. The car was supplied in July through a special finance scheme provided by Acorn Direct Services, a consultancy to the licensed cab trade. Mark Cartledge also qualifies for a £1,000 purchase grant from the Government's Powershift incentive programme.

Geoff Stathers of Acorn Direct Services has been carrying out an energetic nationwide campaign to promote the advantages of the Toyota Prius to councils, in association with the company's nominated supplier, Essex Toyota dealer Hills of Woodford.

It was Hills’ Fleet Sales Manager Michael Ives who originated the idea of promoting the Toyota Prius in this way, after Stathers had approached him about lpg-powered private-hire vehicles. "I told him the Prius was a better solution – with the fuel savings it offers in inner cities and its environmental friendliness, it's exactly what councils need. Geoff and I have worked closely on this for a year to get the ball rolling, and we have a number of other councils interested in the Prius."

Maintenance will be carried out through a local Toyota dealership. Mark Cartledge, who previously owned a Citroen Xantia diesel, expects to cover as much as 80,000 miles in the Prius in its first year. He has already been arranging for other local drivers to try out the vehicle, with the help of Acorn Direct Services.

"Geoff Stathers and Michael Ives have been enthusiastic supporters of the Prius and their efforts to promote it to the private-hire trade are much appreciated," said Jon Pollock, General Manager of Toyota Fleet. "We do believe that hybrid technology is the practical way forward for local authorities concerned about clean-air policies. This purchasing decision by a prominent opinion-former, and its approval by the local council, marks another significant advance in the progress of the Prius."