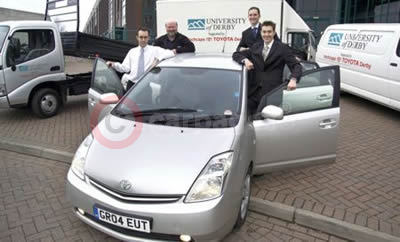 The University of Derby is giving its employees the chance to get behind the wheel of a Toyota Prius - European Car of the Year for 2005 - and so far their response has been extremely favourable.

The University is undertaking a six-month evaluation programme with a view to featuring the petrol-electric car in a new pool-car scheme - part of a package of measures designed to reduce university traffic, fuel wastage and pollution.

The Prius is on extended loan from local dealership Inchcape Toyota, and is being made available to staff as a temporary pool car. "Ten people have used the vehicle already and everybody loves it - they all think it's great," said Fleet Manager James Brown, a month into the trial. "Many more people have booked up to use it."

Drivers are often surprised to learn that the Prius doesn't need to be plugged in, said Mr Brown. "But after driving it, they find that not only is it just like a 'real' car, but it's actually better than most 'real' cars, because of the way it drives. They say it feels a lot livelier than the vast majority of their own cars. It also has a very comfortable cabin and a very nice level of equipment."

The University's Travel Plan aims to encourage staff to find alternatives to using their own cars for work. They can opt to use a subsidised internal bus service, electric cars and bicycles, a car-sharing scheme or special facilities available for cyclists and motorcyclists.

Those who drive their own cars have campus parking fees, administered on a salary-related percentage basis, deducted from their pay, though infrequent users of car parks enjoy rebates thanks to an automatic number-plate recognition system.

A pool-car facility would form part of the Travel Plan, and James Brown is looking at the possibility of using Toyota Corolla diesels alongside Prius for such duties. The scheme will go ahead if the trial shows that pool cars not only provide a greener solution but are more cost-effective than staff mileage payments.

"The University and Toyota's Burnaston plant are only a few miles apart, so it seemed natural for us to work together," said Mr Brown. "Inchcape Toyota has been excellent - the fact that we can try out the Prius for six months shows how brilliant they've been."

He was also personally impressed by the Toyota Prius, and said it compared favourably even with his own conventional turbocharged car. "I think the Prius is excellent. It's the first automatic I've ever driven where I haven't missed the option of changing gear manually. Pulling away from a junction in a normal petrol car, I'd feel I had to rev it, but the Prius does the job with no hassle or fuss. I wouldn't normally consider an automatic for my own use - but I could certainly live with this one," he said.

A range of Toyota LCVs has also been supplied to the University by Inchcape Nottingham and include one Hiace and two Dynas (one box van and one tipper). The vehicles will be used in various roles for the day-to-day running of the University as well as helping the students with open days, fashion shows and art displays.